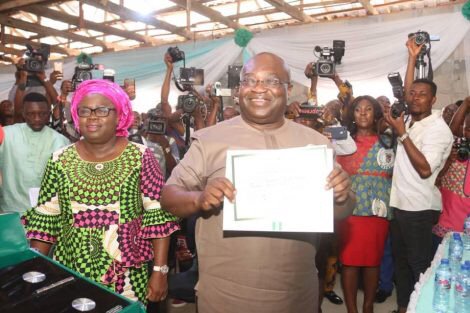 The Independent National Electoral Commission (INEC) has issued certificate of return to two victorious candidates of the Abia House of Assembly re-run election.

Dr Joseph Iloh, the Resident Electoral Commissioner in Abia  issued the certificates to the two candidates, Dr Mike Ukoha and Dr Obinna Ichita at INEC office in Umuahia on Wednesday.

Ukoha and Ichita, both candidates of All Progressive Grand Alliance (APGA) represent Arochukwu and Aba South constituencies respectively, in Abia House of Assembly.

Iloh said that the certificates of return were consequent upon the elections conducted on Saturday, March 9, 2019 and Saturday, Jan. 25, 2020.

He said that the latter day was appointed pursuant to the orders of the Court of Appeal, Owerri, that a rerun election be conducted in definite polling units and wards in the two constituencies.

“Today, we can pride ourselves in the fact that the returns previously made by the commission for the two constituencies aforementioned have been reaffirmed by the voters, who came out and spoke unequivocally,” Iloh said.

He said that the decision of the voters had vindicated the position of the commission.

According to him, the candidates who were hitherto returned elected have been returned reelected for the second time.

Iloh enjoined other contestants to lend their hands of support to the successful ones and encourage them to face the business of governance and of law making in particular.

In their separate responses, Ukoha and Ichita expressed confidence in INEC in conducting credible elections, even as they assured their constituents of quality representation.

Both candidates defeated other contestants of the People’s Democratic Party (PDP), All Progressives Congress (APC) and other political parties.