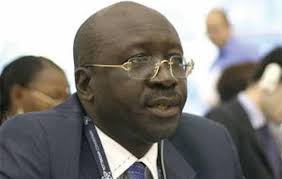 A lawyer and right activist, Deji Adeyanju, has urged the chairman of Peoples Democratic Party (PDP), Dr Iyochia Ayu, to make the party a strong and effective opposition platform.

In a letter titled: “An open demand to provide purposeful opposition and halt the sinking ship of governance’ he said the former Senate President should be mindful of his antecedent as an advocate of good governance, rule of law,and human rights.

Adeyanju lamented that since 2015, PDP has been aloof and thoroughly disillusioned while the government of President Muhammadu Buhari and the All Progressives Congress (APC) continue to run the country aground.

He alleged that the opposition party has not adequately responded to the anti people policies of the government, adding that it has been lukewarm.

The letter reads in part: “We recall that in 2016, the PDP offered no resistance whatsoever while the government of t invaded the homes of our most revered judges, desecrated same and arrested our judges like common criminals.

“It is a testament to PDP’s weak position to note that none of these judges were ever convicted. They were rather humiliated for simply doing their jobs, ultimately resulting in the death of Honourable Justice Ngwuta.

“While Nigerians generally excused PDP’s hibernation and tied it to its humiliating defeat at the 2015 election, there were no excuses when the President repeatedly refused to sign the Electoral Act into law and PDP failed to galvanise the citizens towards a push for better electoral reforms, beginning with the signing of the Electoral Law.

“Smarting from bulldozing its way with anti-people’s policies, the government of the day began to systematically borrow money that generations unborn may not be able to pay up. Again, there was no resistance from the PDP.

“We also remember the numerous human rights abuses perpetuated by the government of the day and state agents, without even the least resistance by the PDP.

“Rather than provide purposeful leadership, the PDP has taken solace in issuing lame press releases that do not circulate beyond Wadata house. For a party that once labelled itself the biggest party in Africa, this is a shame!

“It is with the foregoing in mind that Nigerians generally heaved a sigh of relief when the new National Working Committee headed by you was sworn into office. Nigerians expected a robust opposition.

“However, it appears the spirit of press release and junketing associated with the Secondus led NWC has yet again taken over the party. The party has failed to even galvanise its members in the National Assembly to put up resistance, even if symbolic, to the government’s persistent borrowing.

“Rather, you have made it a duty to attend every PDP governor’s forum meeting or other events organised by PDP governors, as though you were elected to be a governor!

“Once again, and for the fifth consecutive time, the President has delayed assent to the Electoral Act Amendment Bill. There is no word from PDP on this serious issue that affects the nation’s democratic space.

“We therefore ask: what is the problem with PDP? What manner of spirit has invaded the party that it cannot challenge the bad governance presently being experienced in Nigeria? Why is the PDP keeping quiet while economic saboteurs and state agents import contaminated fuel into the country, at the detriment of the average Nigerians? When will the PDP wake up from its slumber?

“Although we have no affiliation with the PDP or any political party whatsoever, we are, however, constrained to write this open letter to you because evil persist when good men do nothing. When the political actors put their personal interest over and above that of the nation, the citizens look up to the civil society to take the baton and do what must be done.”

“We, therefore, urge that you lead the party to provide purposeful leadership. Demonstrate to the nation that there is hope for the average citizen. If you cannot do this, you must give way for the citizens to fight the one-party system Nigerian presently practices.

“You will recall that during your acceptance speech you had promised to reposition the party and rescue the nation. We call upon you to walk the talk and stand up to be counted. You must free yourself from the shackles of the governors and stoically refuse to be a lackey.

“There is still time to make amends. Please, do not fail the nation.”