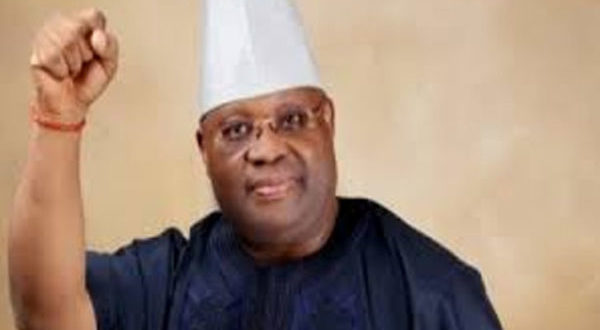 Adeleke’s classmates speak out on his WAEC controversy

Old students of Muslim Grammar School, Ede, (now Muslim High School 1, Ede) in Osun State, have confirmed that the Peoples Democratic Party, PDP, candidate in the 2018 governorship election in Osun, Senator Ademola Adeleke, was a genuine member of the 1976/81 set of the school.

They also averred that he sat for the West African School Certificate Examination, WASCE, and finished with them in 1981.

His classmates of the 1976/81 set, at a press conference in Ede after a solidarity visit to his house on Wednesday, disclosed that Adeleke was not only their classmate but had also served meritoriously as the president of the school’s Old Boys’ Association for four years.

According to them,  if he did not sit for the WASCE and finished from the school, he wouldn’t have been eligible to emerge as the president of the association.

Spokesperson of the set, Dr Olapade Mukaila noted that “all the attempts by some people spitting out hatefulness in their biles to run down Senator Ademola Adeleke is only an attempt to try God’s will and an effort in futility.”

The statement read in part: “Our 1976/’81 set sat for the final West Africa School Certificate Examination and we had our names, including Senator Ademola Adeleke’s recorded in its ledger as presented by an assistant registrar of the body (WAEC) when he was called upon by an FCT court, Abuja.

“What further proofs are Senator Ademola Adeleke’s antagonists looking for to confirm his attendance and participation in the 1981 WASCE with the rest of us?

“Senator Ademola Adeleke’s five-year tenure at the Muslim Grammar School together with us were years we shall proudly refer to as years well spent in our formative years. We of the 1976/1981 set of which Senator Ademola Adeleke was a part could, with all sense of responsibility and patriotic zeal, affirm that the distinguished Senator gave a good account of himself as our classmate.

“We stand tall behind the distinguished senator as one of our own in the 1976/’81 set of Muslim Grammar School Ede (as it was then). No amount of intimidation and mean measures by Senator Ademola Adeleke’s detractors will ever remove that fact of our togetherness at Muslim Grammar School, Ede.

“We wish to state that Ademola Adeleke is the Moses of Osun State whom God has duly anointed to be a star among stars.”

Mukaila, however, appealed to all the classmates to be steadfast in their solidarity for Senator Adeleke.

”We should not allow ourselves to be used for any dirty tricks of Ademola Adeleke’s avowed enemies in their bid to score cheap political points.

“We are resolute that Ademola Adeleke belongs to our set and no force on earth can make us deny him as some unscrupulous people want us to do.

“Our good friend, Ademola Adeleke, should fear not, for we, who are with him are more than they who are unjustifiably against him.

”We take joy to state unequivocally that he was a focussed individual with a clear vision for the good of his fellow students during our time at the Muslim Grammar School, Ede,” he said.