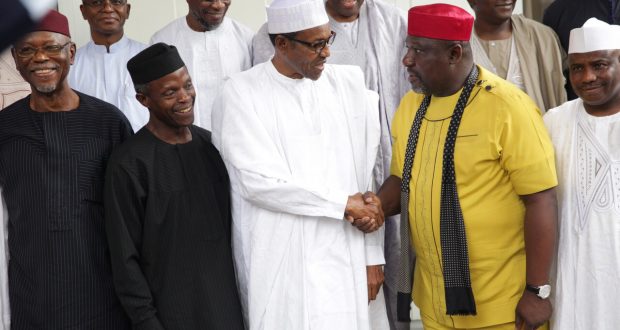 Tinubu to Okorocha: You and others must be joking to endorse Buhari for 2019

A Chieftain of the All Progressives Congress (APC), Bola Tinubu on Wednesday ruled out automatic ticket for President Muhammadu Buhari in the 2019 Presidential election.

Tinubu who was in Akure on a private visit to the the leader of the Pan Yoruba Socio-Political Group, Afenifere, Reuben Fasoranti was reacting to endorsement of President Buhari by some governors in the ruling All Progressives Congress APC.

His visit to the leader of Afenifere was seen by many as a realignment with the mainstream Yoruba Group ahead of the 2019 general elections.

The former Lagos Govenor stated that : “No governor can appopriate the power of endorsement to themselves adding that an indivudual opinions ” does not matter at this stage”.

After the closed door meeting, Tinubu told Journalists that the governors endorsing the President are on their own.

“I have not heard about the endorsement and the party Spokesman has not said that.

“No governor can appropriate the power of endorsement to themselves. Buhari is a believer in process, the Buhari I know believes in rule of law. ”

“Who says he will lose at any convention? But if the national body, the National Executive Committee and all of us as members endorsed him as our single candidate, we will not be violating INEC regulations, we will not be violating our party Constitution.
“What you are hearing is just a campaign by other people who might like to do so.”
Imo Governor, Rochas Okorocha has been a leading voice among those calling for automatic ticket for Buhari ahead of the 2019 Presidential election. He had also said his own presidential ambition had been shelved to make way for the endorsement of the President for a second term in office come 2019.

Previous: Now that Obiano has been re-elected as governor, Uzor-Kalu wants him in APC
Next: Daniel takes PDP Chairmanship ambition to Kogi, says ‘I’m a crisis manager’