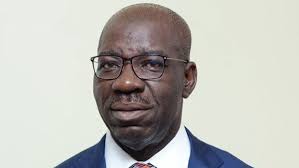 A Federal High Court sitting in Abuja has dismissed the suit filed against the governor of Edo State, Godwin Obaseki on certificate forgery.

The ruling was delivered on Saturday by Justice Ahmed Mohammed

The suit was filed by the All Progressives Party (APC) and a chieftain of the party, Williams Edobor, against the governor.

In the suit, APC and Edobor had alleged that Governor Obaseki presented a forged certificate for the Edo State governorship election held on September 19, 2020.

They claimed that the document was purportedly issued by the University of Ibadan, while the governor presented same to Independent National Electoral Commission (INEC) .

Before the ruling, both counsels to the two parties in the matter had closed their cases after they presented witnesses and evidence to the court.

It will be recalled that  Obaseki contested and won the governorship election on the platform of the Peoples Democratic Party (PDP) after dumping the All Progressive Congress, to seek second term

Previous: ‘Coup’ Attempt in US: Buhari will not undermine democratic institutions- APC
Next: “You are not above the law,”- Biden warns Trump