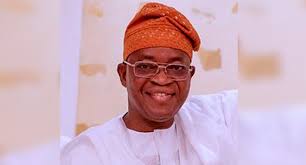 The main opposition party the Peoples Democratic Party in Osun State  has called on President Muhammadu Buhari and the Economic and Financial Crimes Commission (EFCC) to investigate and prosecute the state Governor,  Adegboyega Oyetola over the multi-billion Naira property scandal involving him and his associates

The opposition party also demanded the immediate refund of all wages and allowances paid to Oyetola during his time as Chief of Staff to his predecessor, Rauf Aregbesola

He was accused of disobeying extant laws of the land while he held the office of Chief of Staff to the then State Governor.

“Adegboyega Oyetola according to the publication, is said to have fraudulently purchased a London Mansion for a whooping sum of 9 million Pounds (Over 6.3 billion Naira) from an international fugitive, who has been on the watchlist of governments of United Kingdom, United States and Nigeria.

“The acquisition was also carried out in what could be termed an all time record scandal, as the same property is said to be valued at 17 million Pounds.

“Facts emerging from Premium Times publication show that the government of Federal Republic of Nigeria had secured a freezing order on the same property from a Lagos High Court presided over by Justice Oluremi Oguntoyinbo, who around October 2017, dismissed all objections against the freezing order.

“It was around the same time documents revealed that Mr Oyetola through an offshore company, Aranda Overseas Corporation, which is confirmed to be an offshore company incorporated in the British Virgins Island by two of former Lagos state governor Senator Bola Ahmed Tinubu’s most trusted surrogates – Adegboyega Oyetola, formerly chair of Paragon Group of Companies and incumbent governor of Osun State and one Elusanmi Eludoyin, Mr Oyetola’s successor at Paragon, bought the Mansion in a curiously ambiguous discount deal.

“The property is situated at 32 Grove End Road, in the highbrow Westminster neighbourhood of London. The Mansion has also become a sort of mecca to associates of Mr Tinubu including his main surrogate, Gboyega Oyetola and other politicians of the ruling APC, as the former Lagos governor started staying there after receiving treatment from a British Hospital.

“Our party is worried that the period of this fraudulent transaction coincided with inglorious reign of the APC administration in Osun State during which the accused, Adeboyega Oyetola held sway as Chief of Staff to the immediate past governor of the state, Rauf Aregbesola. Mr Oyetola, the good people of Osun State must note, was the chief negotiator of the non productive, multi-billon naira loans infested on the state and which has crippled economic wheel of the state. One then wonders, what the state treasury is presently going through with Adegboyega Oyetola as the State Governor.

“This confirms our fears that Osun State had become a conduit, through which public funds are being looted with reckless abandon by APC gang of heartless political robbers, whose sole business in the state is to bleed it dead with mindless looting.

“We strongly call on President Mohammadu Buhari, who incidentally, had also been a guest at the Mansion presently housing Oyetola’s citadel of corruption to use his exalted office to clear all doubts about his stance against corruption in Nigeria and bring Adegboyega Oyetola and his proxies to justice,” the party claime

Previous: 2023: Primate Ayodele warns APC on its choice of National Chairman
Next: Sen Abaribe should be in prison by now- Femi Adeshina