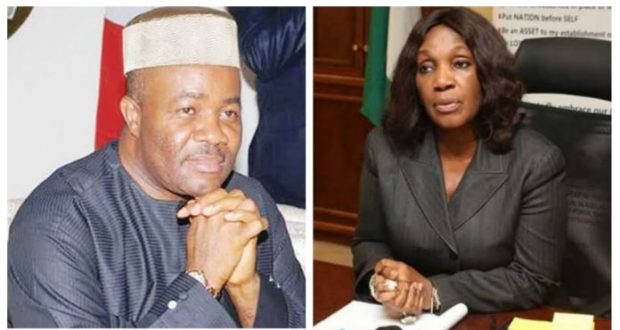 The was made by the group following allegations of fraudulent practice levelled against him.

A statement by the group’s National Coordinator, Emmanuel Onwubiko also urged the Economic and Financial Crimes Commission, EFCC, to probe the activities of the Ministry of Niger Delta Affairs under Akpabio’s leadership.

According to HURIWA: “We are calling on the EFCC to carry out a proper investigation on NIGER DELTA AFFAIRS Minister, Godswill Akpabio and we demand his immediate sack, except and unless Mr President does not care about the people of Niger Delta.

“Since Godswill Akpabio came to power, there has been one accusation of fraud/corruption or the other.

“HURIWA is not accusing him of being the thief but the story of corruption around him is becoming unbecoming as if he is the only minister in Nigeria.

“Another worrisome reason is the sexual harassment allegation made against him by the immediate past MD of NDDC, JOY NUNIEH.

“HURIWA is canvassing the sack of the Minister of Niger Delta Affairs, Godswill Akpabio and the Interim Management Committee of the Niger Delta Development Commission, so they can be arrested by the Economic and Financial Crimes Commission (EFCC) for comprehensive investigations and prosecutions if found to have a prime facie case to answer which the ompetent court of law should be called upon to adjudicate but the minister and the NDDC management should be dismissed forthwith.”

Reacting, Akpabio claimed that the former NDDC boss had a character problem.

Also, HURIWA urged Buhari to relieve Abubakar Malami, the Attorney General of the Federation, AGF, and Minister of Justice of his duties over allegations of corruption.

The group stated that Malami has been unable to sufficiently debunk the information that his son had an extensively lawless social event “thereby violating the quarantine act of 1926 which gave Mr President the power to impose certain restrictions on number of people to attend a social or religious gathering during this dangerous pandemic period.”

HURIWA said: “The son of the minister of Justice who is the Chief law officer of Nigeria flagrantly violated an extant law invoked by Mr President. The only other remedy for Mr President not to sack the Chief law officer of Nigeria and the minister of Justice, Abubakar Malami SAN is for him (Malami,SAN) to provide forensic evidence that contradicts the newspaper reports and the avalanches of recorded videos trending on respectable Social media fora.