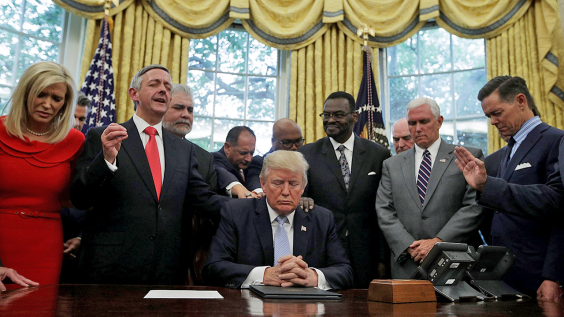 WASHINGTON, DC - SEPTEMBER 01: U.S. President Donald Trump, Vice President Mike Pence and faith leaders say a prayer during the signing of a proclamation in the Oval Office of the White House September 1, 2017 in Washington, DC. President Trump signed a proclamation to declare this Sunday as a National Day of Prayer for people affected by Hurricane Harvey. (Photo by Alex Wong/Getty Images)

My summary of the outcome of the United States election was that the promoters of nationalism, isolationism, xenophobia, conspiracy theories, lies, indecency, hatred, division were rejected. We saved science; we saved democracy; we saved the world, and we saved Christianity too.

One of the things that became clear to me after Joe Biden won the United States presidential election was that voting President Trump out is not enough, we need to pull Christianity back from the brink. I did not realize how bad Christianity has sunk before now. What Trump’s Presidency has done to Christianity around the world, especially in Nigeria, is so awful that I concluded that my Christian brothers and sisters are no longer reading their Bibles.

Before the election, hundreds of millions of Christians all over the world framed the choice between Biden and Trump as a choice between evil and good (not respectively). They fasted and prayed to God to come down and show Himself. They prayed for God to show that he is still God by intervening in American democracy and prove to the world that He has not forgotten us.

Let me take you to the Scriptures: Jeremiah 33:6, “Behold, I will bring to it health and healing, and I will heal them and reveal to them an abundance of prosperity and security.” President Barack Obama and Vice President Joe Biden saw the pains of millions of Americans and provided affordable health care for them. They gave millions of Americans peace of mind and access to medical care that improved their health and wealth. They brought relief to millions with preexisting health conditions. That was practical Christianity.

This is unlike the Republicans and President Trump that were at the United States Supreme Court yesterday, arguing to take health care away from 20 million Americans—in the middle of COVID-19 — 19 pandemics. For 4 years, these so-called Christians have been oppressing the poor by attempting to dismantle their health coverage. This is even when Proverbs 22:9, as recorded in the Holy Book states that “Whoever oppresses a poor man insults his Maker, but he who is generous to the needy honors Him.”

So, between Trump and Biden who is evil? Who insulted his Maker? Who is generous to the need of the poor and forgotten?

In case you do not know, living without healthcare coverage in America means that you are, literally, one sickness away from bankruptcy: facing an immediate death sentence or dying by installment. Yet, “Christians” like President Trump want to destroy the lives of millions of Americans currently receiving health coverage under Obamacare including those with preexisting health issues.

So, between Biden and Trump, who is a Christian?

To drive another point home on the difference between good and evil, I will take my fellow Christians, who apparently have stopped reading their Bibles, to the scriptures again. Jesus famous words, “Let the little children come to me”, can be found in 3 Gospels, specifically in Matthew 19:14, Mark 10:14 and Luke 18:16. While this is a relatively simple phrase, it profoundly reveals God’s affection for children.

But recently, it was revealed that lawyers cannot find the parents of 545 migrant children separated from their families at the border as part of the Trump administration’s cruel immigration policy. This was unlike Obama and Biden that loved Children, just like Christ. They welcomed and accommodated immigrant children to the “country of immigrants” — United States.

Clearly, the King of Kings did not approve of Trump’s policy that forcefully took away children from their parents and puts them in cages policy. That is part of the reason why he answered the prayers of millions of Christians and chose Biden over Trump.

Since Jesus is all about loving one another, especially the poor and the outcast, and Trump is all about money, power, building walls, and putting people in cages, are you blindly supporting what Jesus Christ will frown at? So, I ask again: Who is a Christian?

The fact is that because many Christians, unfortunately, have been brainwashed by Trumpism, their interpretation of Christianity has been tainted. They have thus failed to understand that Christianity is all about love, meekness, and humility. I still wonder the version of the Holy Book these Christians are reading (that is if they still read one).

The truth is that we saved Christianity by voting Trump out. To complete the rescue of Christianity, I urge my fellow Christians to go back and start reading their Bibles, one more time. That is the only way they can, slowly, continue the climb out of the ditch.

Why are you hitting your head on the wall over same-sex marriage in Oyibo man’s country? There are gazillions of sins condemned in the bible, including fornication, lying, blasphemy, and stealing that so many of us, including the so-called men of God have openly embraced.

We save Christianity and the position of Savior is already filled, and Jesus is one person Trump cannot fire or bully.

I will end this piece with the Words from Matthew 7: 5: Hypocrite! First, get rid of the log in your own eye; then you will see well enough to deal with the speck in your friend’s eye. These are the Words of the Lord. Thanks be to God.