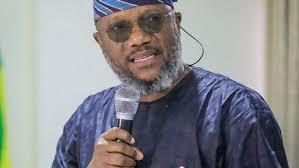 According to him,  his decision to dump the party was as a result of the failure of the national leadership of the APC to settle the crisis facing the party in the state.

In the letter addressed to the State Chairman of the APC, the former federal lawmaker said that he could not in good conscience continue to participate in a process that is mirred in injustice.

“This is to formally notify you of the resignation of my membership from the All Progressives Congress, APC.

“This decision became necessary because of the failure of the National Leadership of the Party to intervene fairly in the internal crisis rocking the Ogun State APC.

“As a principled and forthright individual, I cannot in good conscience continue to participate in a process that is devoid of justice,” he said.

According to him, the party led by  Abdullahi Adamu “has continued to ignore their pleas and complaints that bother on the lopsided state congresses, Local Government elections, party executive elections, the delegate list, and recent party primaries.

He lamented that leadership of the APC in Ogun failed to uphold the sharing formula as agreed by the various stakeholders and parties.