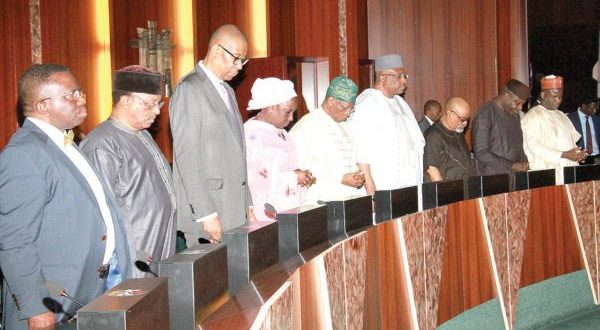 Analyst to Buhari: Look beyond APC in appointing cabinet members

Mr Jude Nnadi, a political analyst has urged President Muhammadu Buhari to look beyond the ruling All Progressives Congress (APC) in selecting his next cabinet members in order to move the country to the next level.

Nnadi disclosed this while speaking with the News Agency of Nigeria (NAN) in Nsukka on Monday.

He said the president should look for the best technocrats, captains of industry, erudite professors and other Nigerians who have enviable track records not minding their political party affiliations.

“The president as the father of all Nigerians should recruit his cabinet members based on qualifications and competency but not on party membership in order to move the country to the next level.

“Appointing mediocre from his party just to impress and satisfy party members will be unpatriotic as well as retrogressive to the country.

“Mr President should appoint capable hands that will enable him to consolidate his administration’s achievements in first tenure,” he said.

He said Nigerians expect Buhari in his second tenure to tackle high rate of poverty and unemployment in the country that have resulted in increase in armed robbery, kidnapping and other violent crime.

“The country needs capable hands that will help the administration to preposition the economy from the present oil mono-economy to a diversified economy.

“We have capable Nigerians both at home and in Diaspora, this is the time to assemble them to bring their wealth of experience to bear in other to move the country forward,” he said.

Nnadi urged Nigerians to provide the necessary support since the president and his cabinet could not do it alone.

“Nigerians irrespective of tribe, religion or political party affiliation should give Buhari’s administration maximum cooperation by keying into government policies and programmes.

“We have no any other country we can call our own, so with determination and patriotism we can make Nigeria one of the leading economy in the world.

“America and other developed countries did not become great by wishful thinking but through unity, hard work, determination, patriotism, sacrifice and dedication to the fatherland,” he said ‍