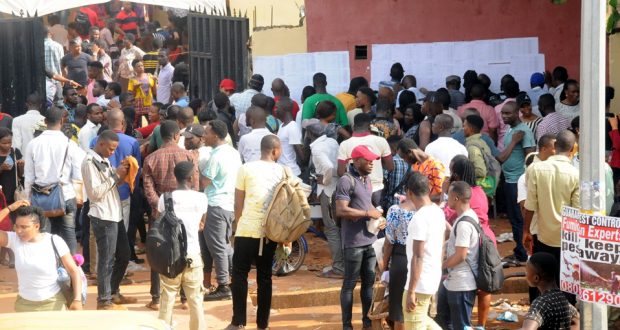 About 2.1million registered Anambra voters trooped out in great numbers, today November 18, 2017, to the polling booths to decide the future of their state for the next four years.

Amidst tight security in and at the borders of the state, Anambra voters defied all odds including IPoB threat and exercised their civic rights. The process however suffered few setbacks and other highlights:

The city of Awka at 7:12 am woke up with hopes of a new dawn with roads deserted in line with the restriction of vehicular movement. The usual busy Bridge Head axis of Onitsha was deserted as the police have earlier announced total closure Niger bridge beefing up security in preparation for the election. Residents around Eke Awka roundabout, in Awka, however, woke up to see the scene of an accident where a container fell off a truck and crushed a tricycle, an accident which occurred the previous day by 10:00 pm.

While some units received electoral materials as early as 7 am, it was a different tale for some other units. Agulu Village Square Ward IV got electoral materials at 7:35 am. Ward II in Amatutu village in Anambra central was left anticipating as INEC ad-hoc staff and electoral material was yet to arrive at 8:00am. Nkpor Ward 1 polling unit 010 in Idemili North Local Government area of Anambra State also complained of low turn out of voters blamed on the late arrival of INEC officials.

The Independent National Electoral Commission’s National Commissioner, Solomon Soyebi in response, blamed the late arrival of electoral materials at several polling units in Anambra on corps members. Soyebi told Channels Television in Anambra that some of the corp members did not have the right attitude towards the exercise and were hesitant to go to some areas.

Heavily armed security operatives were seen in some units and council areas during the election. But for the intervention of security officials of the Department of State Services (DSS), a man at the Community Primary School, Amawbia, in Awka the state capital would have disrupted the voting process.

The man was arrested for allegedly attempting to pay voters to vote for his candidate. He was led away from the polling unit and into a Hilux parked close to the unit. The man was eventually released after he claimed that the cash that he had on him was meant for the payment of his party agents. There were reported violence in some other wards but security officials were reportedly swift to act.

Defying the heat and IPoB threat

Despite the scorching heat, voters at Amawbia, Awka South LGA were resolute in their desire to vote. Based on the high turnout of voters at today’s Anambra election, one can conclude that Anambra voters were determined about exercising their civic duties despite threats by the proscribed IPoB group which have threatened Anambra residents not to go out and vote and to boycott the election.

Previous: Politics should not be do-or-die, Obasanjo warns
Next: Odigie-Oyegun in Uyo, says Buhari working hard to turn things around for better