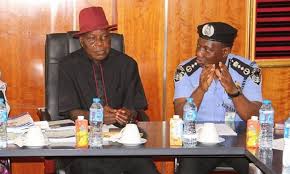 The Police Service Commission ( PSC) will be sending a 17-member team to Anambra to monitor the conduct of policemen during the state governorship election scheduled for November18.

The Head of Press and Public Relations of the Commission, Ikechukwu Ani, made the announcement in a statement in Abuja on Tuesday.

Ani said that the team comprised six Commissioners and 11 senior staff of the Commission who were expected to arrive Awka on Thursday.

The Spokesman explained that the team was expected to ensure that all policemen involved in the election complied with the rules and regulations guiding their conduct.

He said that the initiative was the Commission’s contribution to the sustenance and deepening of the nations’ nascent democratic values.

He said that the Chairman of the Commission, Mike Okiro, had warned that any Police Officer found wanting in the discharge of his or her duties during the election, would be sanctioned.

Okiro added that officers were expected to demonstrate a high level of discipline in the performance of their duties.

The Nigeria Police Force had on Monday deployed 26,000 additional policemen for the election.

Previous: Visit to Ebonyi an affirmation of my commitment to a united Nigeria for all – Buhari
Next: I woke up and discovered that my ADC was gone, now my life is in danger – Obiano