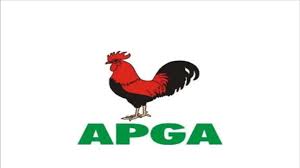 The ruling  All Progressives Grand Alliance (APGA), has applauded the Chief Justice of Nigeria, Justice Ibrahim Tanko Mohammed for his intervention on the ”indiscriminate and frivolous litigations” initiated by unscrupulous politicians.

A statement signed by its National Publicity Secretary, Barrister Tex Okechukwu on behalf of Ozonkpu Oye, and sent to newsmenon he applauded the Chief Justice for his prompt intervention

According to the party leadership, absolute disregard and abuse of court processes and the rule of law became the order of the day and further lauded the CJN’s timely intervention.

It further expressed confidence in the judiciary and the Chief Justice of Nigeria, charging them to strictly toe the path of natural justice in the resolution of the conflicting orders being issued by the summoned judge.

APGA also expressed confidence in the intrepid and courage of the Chief Justice of Nigeria by taking the bull by the horns in wading into the matter.

The statement partly reads, “The egregious legal practitioners were not left out, as they are expected to sincerely uphold and apply the provisions of the constitution of the federal republic of Nigeria and equally observe the rule of law without blemishes.

“More also they are officers in temple of justice, therefore, are expected to practice their profession as people who have knowledge of the rule of law, professional conducts and practice procedures and should discharge their duties with absolute decorum and unfettered integrity as learned gentlemen.

“Unfortunately, some mischievous politicians lured some lawyers with lofty promises or financial aggrandisement that compelled them to disregard their oath of office and gambled with the judicial processes and the lives and destinies of Nigerians who run to them for professional assistance. These discrepancies by these judicial officers of course were meted with retribution and disciplinary action as deterrence.

“As officers in the temple of justice who took oath to keep and uphold the
tenets of the constitution of the federal republic of Nigeria and to observe and abide by the rule of law, it is an aberration and flagrant abuse of professional conduct to shop for judgements indiscriminately and instituting actions recklessly in courts even without territorial or substantive jurisdictions and also appealing against orders or judgements of courts in another court of coordinate jurisdiction. These unprecedented actions by the judiciary left the whole country, particularly the common man despairing, helpless and befuddled”.