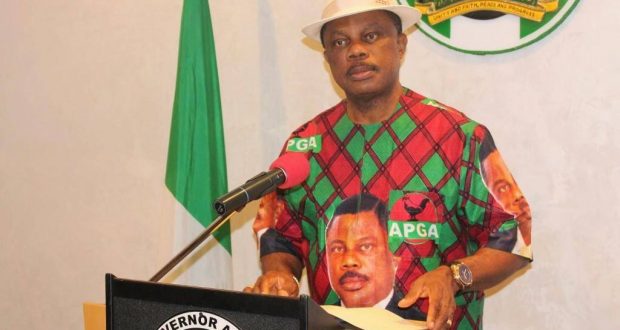 Anambra made Lagos what it is, whether anyone accepts it or not – Obiano

Anambra Governor, Willie Obiano, has said that Lagos State is what it is because of the impact of ‘Anambrarians’ on the state.

According to him, “Anambra made Lagos what it is” whether anyone accepts it or not.

Obiano stated this on Sunday while stating developments in the state as well as his plans for the next four years as he succeeded in his re-election bid after securing a landslide victory over 36 others gunning for his position.

“Before I came in, security was an issue. I came, I saw, I conquered and it’s not a static thing. Security is continuous, so we are moving and we are going to put in more efforts to ensure that the next four years is even far better than they have seen it now.

“I’ll keep awake so that all Anambra people and those living in Anambra can sleep with their two eyes closed.

“I’m not going to drop the ball, my eyes are on the ball. I am working hard to ensure that at the end of my eight years, governors coming after me will not have to depend on FAAC to run the state and that’s what I’m doing in investments. Security is the greatest thing that I have done and it is bringing a lot of people in.

“The greatest thing we want to do is to emulate what the Israelis have done. We have very rich Anambra people all over the world – Anambra made Lagos what it is, whether they want to accept it or not – the taxes that are paid are mostly by Anambra people.

“The development that is going on there, the houses that are owned there – it is the same all over the place but none in the South East. Why? First no security then, now we’ve gotten security.

“So I am emphasising that this is time to come home and invest. By the way, we have reduced our challenges on investment to almost zero. Anambra now is the easiest place to come for investment because you sit in a one-stop investment outfit called ANCIPA, headed by many bankers – You get things sorted out in an hour or two – you get your C of O in two weeks if your case is good. If your case is not good, they help you build it or they cancel it as the case may be.”

Previous: Nobody has won 21 over 21, we scored 100%, it was a full endorsement – Obiano
Next: South East Governors on Ekwueme: The death of our father and leader is devastating