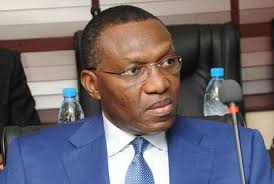 The top politician stormed the Ezechima primary field venue for Onitsha North rally with pomp even as many people trooped out enmasse to receive him,

Speaking at the rally, Hon. Lynda Ikpeazu, representing Onitsha North and South at the Federal House of Representatives who recently defected to APC was at the rally.

She collapsed her structure for Andy Uba and promised to mobilize more support for his victory.

Speaking, Uba promised to return Onitsha ancient city to its enviable state by providing basic infrastructure which has been abandoned for many years, if elected the governor.

He promised to conduct local government election within six months of his administration, if elected.

“There is no other better time to prioritise Onitsha Urban renewal than now. If nothing is done urgently, we will have a city that will be impossible for anyone to move around. The entire roads in Onitsha and other parts of the state have been collapsed.

“As governor, we are going to drive integrated Urban renewal that will end the increasing crime rate in Onitsha. The menace of touts is already threatening businesses in and around Onitsha and our state economy is the worse for it.

“Accordingly, there will also be a new policy regime on revenue collection that won’t be a threat to our people, but instead help to boost the state’s economy.

“Onitsha has been abandoned for years now and we are coming to rescue it from the status of an abandoned city by successive governments. I had the overall development plan of Onitsha in mind when I sponsored some of these bills at the senate such as National Inland Waterways Bill, Consumer Protection Bill, Railway Corporation Bill, National Road Infrastructure Fund Bill and the Nigeria Ports and Harbour Authority Bill.

“I want to commend Hon Ikpeazu for her support and mobilization at the rally. I’m not surprised about her love in Onitsha and beyond because of her good representation. “She is called “madam project” due to the number of road projects and empowerments she has attracted to Onitsha”, he stated.

Speaking, Ikpeazu who was confident of Uba to win the forthcoming election due to his pedigree and experience, described APC as party to beat in November 6 election.

“We are one family in APC and we should be committed. Election is hard work, we should work together. It is high time we take over Anambra and connect to the centre. Our candidate is experienced and we shall win the election by voting not by rigging.

“They said APC is Hausa/Fulani party and the result of the election had been written already,