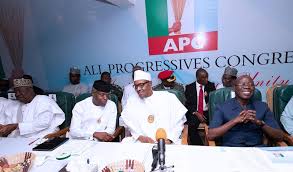 President Muhammadu Buhari had on Wednesday given the Yobe governor the all-clear to supervise the party’s preparation for the March 26 national convention.

In a statement issued on Wednesday by the National Secretary of the caretaker committee, John Akpanudoedehe, Buni directed that the meeting be shifted to a new date.

The statement read: “As directed by the National Chairman of the All Progressives Congress (APC) Caretaker/Extraordinary Convention Planning (CECPC) and Governor of Yobe State, H.E. Mai Mala Buni, a purported emergency meeting of the Party’s National Executive Committee (NEC) slated for Thursday, March 17, 2022, is hereby cancelled.

Before President Buhari’s intervention, the APC had been thrown into a leadership crisis which led to the appointment of Bello as the acting chairman of the party.

The crisis came to a head on March 9 after the Kaduna State Governor, Nasir El-Rufai, said on national television that Buni would not return as the APC chairman over alleged plot to scuttle the party’s national convention slated for March 26.

The governor stated that Buhari sanctioned the removal of his Yobe State counterpart shortly before the President travelled to the United Kingdom for a routine medical check-up.