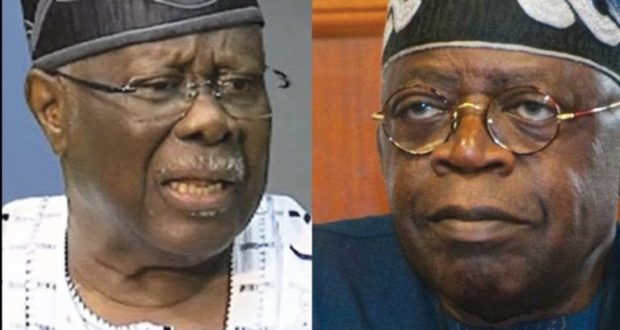 George had alleged that Tinubu enriched himself to the detriment of Lagos State when he was governor between 1999 and 2007.

Prince Ajose, who spoke in Lagos, said there is no way George can back his claim because the former governor has never been indicted for stealing the state’s money

The APC chieftain said the PDP leader in Lagos is only seeking for relevance and that ironically there is no way he can compare himself to Tinubu.

He said in Yoruba parlance everybody is a thief but it is the one that is caught that is called by that name. He added: “Everybody knows that Asiwaju has never been jailed for anything.

But, on the other hand, I’m not saying George was jailed but we all know what happened to him; he was only chairman of Nigeria Ports Authority (NPA) for one term and that was when that thing happened to him.

“Asiwaju spent only eight years as governor of Lagos State and what he has been able to achieve nationally ever since is so enormous that Bode George cannot see himself at the same level as Tinubu.

We know how many people he was able to make, politically and otherwise, as governor and even when he left government.”

Ajose said the PDP chieftain is afraid of Tinubu’s clout and influence in Lagos and the Southwest geo-political zone, “because if the two of them are placed side-by-side, he would leave the place ashamed; as he cannot withstand the calibre of the man he is castigating”.

He said George who rose to the position of national deputy chairman of the PDP was very influential during the Olusegun Obasanjo era as president, but was not able to use his position to better the lot of his followers in Lagos and beyond.

He added: “During that period, many persons who were appointed ministers in Lagos, but today he is not in good terms with any of them.

Ajose who is a former chieftain of the PDP said the opposition party has not been able to produce a governor in Lagos due to the bad leadership of George.

He said: “They have not been able to produce any governor, despite the fact that the chapter was well funded by the government at the centre.

He doesn’t want any member of the party to become governor, so that he would continue to be the party leader in the state.

You know, in party politics, once any person becomes a governor in a state that person automatically becomes the point man or the party leader in the state.

“As long as the PDP does not have a governor in Lagos, he would continue to be the point man and whatever money or logistics that come to Lagos State for electioneering would end at his doorstep. That is the main reason why he does not want anybody to win the Lagos State governorship.”

The ex-council boss, who is a former member of the PDP, said many members of the opposition party in Lagos have jumped ship to the ruling party because of George’s leadership style, in always personalising the position he is holding.

He said followers would always dump a leader that is not prepared to listen to the people he is leading. “It is absurd that George, who is a national leader of the PDP, has never won the polling booth in front of his house in Lagos,” he added.