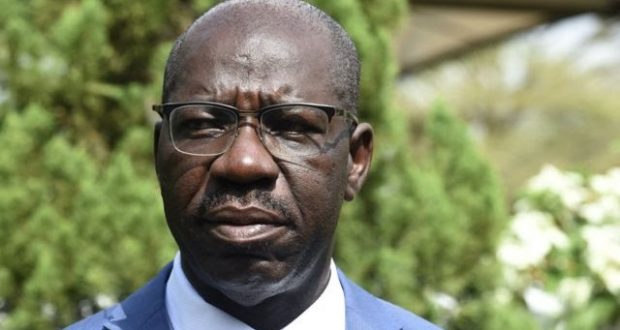 A chieftain of the All Progressives Congress, APC, and a Chief Blessing Agbomerhe has said Governor Godwin Obaseki has lost the capacity to protect indigenes of the state from attacks

Agbomhere told newsmen in Benin city that it was irresponsible for the governor to destroy businesses owned by Edo people when he swore an oath to protect their lives and properties.

But the state Commissioner for Information and Orientation, Mr. Efe Stewart in reaction, described the allegation as not true and ridiculous, adding that it smacks the handwork of mischief makers who are acting out the scripts of their paymaster.

Stewart said, “You know that is completely not true; that story is falsehood. When a man fails to live up to his expectations at home, he will automatically humble himself before his wife. That is what has happened in the politics of Edo state. The governor is busy working, taking care of people of the state and he has been there delivering dividends of democracy to the electorate who voted him into the office and the welfare of the people is his concern in Edo state.

But Agbomere said ” How can a man who swore to build Edo economy be the one destroying businesses and chasing out those that are bringing in various investments to the state.

“What is disheartening is that those suffering in the hands of Obaseki were people that helped him to power,” stressing that persons such as, “Comrade Osakpamwan Eriyo and Adams Shaba were put in prison for many months.

He said, “He destroyed multi million naira hotel owned by Tony Kabaka. If he meant well for Edo people and wanted to seize Kabaka’s Three Star Hotel to demonstrate his allodia power as governor, he would have seized the building and use it as isolation center.

“I was attacked at the Benin Airport on the state government orders; Alhaji Suleiman Egele of Jattu was declared wanted by Obaseki’s government for two years. Kola Edokpayi was arraigned and imprisoned on trump-up charges.

Obaseki personally supervised the attack on Senator Matthew Urhoghide, he stopped Dr. Pius Odubu from getting NDDC job, he wrote a petition against former State Chairman of Edo PDP and now PDP Vice Chairman, South-South, Chief Dan Orbih and asked police to arraign him, and Chief Francis Inegbeneki went submarine to save himself from Obaseki’s capricious tendencies, amongst several others that were harassed,” he stated.

He further explained that, “Chief Joshua Ogene in Okpilla was arrested on trump up charges and many others declared wanted. He went after his benefactor, Comrade Adams Oshiomhole and now it is Captain Hosa Okunbor, who is a well-respected businessman in Nigeria who sponsored his election in 2016.