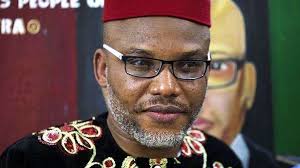 Hon Destiny Nwagwu, former House of Representatives from Abia State, has called  called for the unconditional release of the detained leader of the Indigenous People of Biafra (IPOB), Mazi Nnamdi Kanu, and numerous Biafra agitators incarcerated in security formations across the country.

The politician who is key  member of the All Progressive Congress (APC), also called on governors from the southeast to intervene and ensure Kanu’s release.

He made the call in his birthday message issued to journalists in Aba on Wednesday,

He expressed worries that many innocent Igbo youths are currently languishing in prisons just because, they are exercising their rights in search of justice, equity and fairness.

According to him, governord from the southeast should ensure the freedom of the IPOB supreme leader, Nnamdi Kanu to douse the tensions that have already posed a serious threat to the unity of the country.

He condemned the unconcerned approaches of the southeast leaders in the handling of the successionist agitations..

According to him, “I want to dedicate this day to our Innocent Igbo brothers in different prisons across Nigeria. I am also calling for unity among south East politicians to ensure the release of Mazi Nnamdi Kanu. What our brother Mazi Nnamdi Kanu needs now is political intervention from the people of South East to secure his release.

Previous: Loan Request: Buhari has shown he is the real enemy of Nigeria- Omokiri
Next: President Buhari swears in three new INEC Commissioners