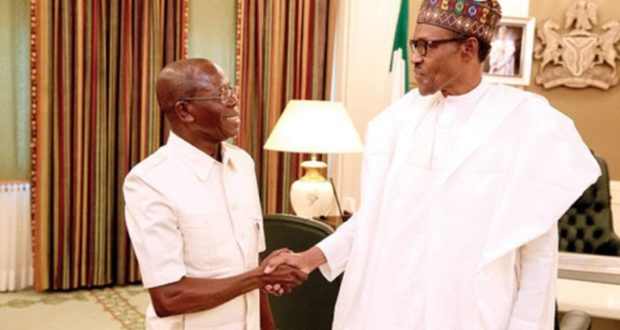 APC Crisis: “God will help and see me through,” Oshiomhole tells Buhari

The National Chairman of the All Progressives Congress (APC), Comrade Adams Oshiomhole, has updated President Muhammadu Buhari on the activities of the party including his purported suspension and subsequent reinstatement by separate Courts.

However, a Federal High Court sitting in Kano, presided over by Justice Lewis Allagoa, on Thursday set aside the Wednesday’s interim injunction of Justice Senchi and subsequently voided the suspension of APC National Chairman, Comrade Adams Oshiomhole.

In his ruling, Justice Allagoa ordered the Nigeria Police Force and the Department of State Service (DSS) to provide security for Oshiomhole to resume in his office.

Oshiomhole, who spoke to State House correspondents after a closed door meeting with the President, expressed optimism that God would see him through the current legal and political upheaval, describing himself as “a child of light who will always defeat darkness’’.

He said: “I thought that I had a duty to brief Mr President as the overall leader of our party about this development. Incidentally when I requested for the audience yesterday, I wasn’t sure what has happened today will happen.

“But I had a duty to inform him about the court order. But happily before coming here, the order from a Federal High Court that has made nonsense of what the FCT court purported to have done has already settled the question.

“And I showed to the president the resolutions of my ward even though a ward executive does not have the powers to remove a national chairman, just to say that the document that we have says clearly that my ward passed vote of confidence on me.

How the court can hold vote of confidence and twist it to me as vote of no confidence, only that judge can explain it to himself.

“But the good news is that this is not a final court nor is it the only court, incidentally it is just the court that didn’t have the jurisdiction even to listen to this matter. And our lawyers so pointed it out but the judge was determined to obliged those who want to destabilise the All Progressive Congress.’’

Oshiomhole, who fingered a serving minister and some governors as being his ordeal in the party, allegedly accused Edo State Governor and some of his supporters of jubilating over the Wednesday’s FCT High Court ruling.

“Let me also say that those behind this plot, the hands you saw which includes as you saw yesterday; you saw the Edo State governor and his people jubilating.

“But that is the irony of life that you will help give birth to a child and the child look for cutlass to want to chop off your neck,’’ he lamented

Previous: Oshiomhole: I am not troubled over APC crisis
Next: Ekiti APC kicks against Ajimobi’s appointment as party’s Dep National Chairman