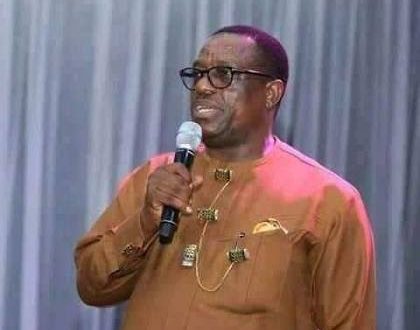 The Acting National Secretary of the ruling All Progressives Congress, APC, Chief Victor Giadom has said the party will respect the position of President Muhammadu Buhari as the ruling party is passing through difficult times.

Giadom, however, made U-turn following the intervention of the President that led to the indefinite suspension of the meeting.

Following the report on Buhari’s intervention, Giadom said, “the decision of the President, who is the leader of the party and in that regards the NEC meeting slated for 17th March has been postponed indefinitely,” The Nation quoted him as saying.

“The party will respect the intervention of Mr. President,” he added.

On a new date for the NEC meeting, he added, “the public and members of NEC will be informed of the new date, but as for today and agreement with the President, the NEC meeting is postponed.”

Daily Post reports that this happened few hours after President Buhari had intervened in the party crisis, postponing the emergency NEC called by Giadom

Previous: Fresh trouble for Oshiomhole as court orders Giadom to take over from him
Next: Ex-gov Segun Oni of Ekiti sets to dump APC for PDP