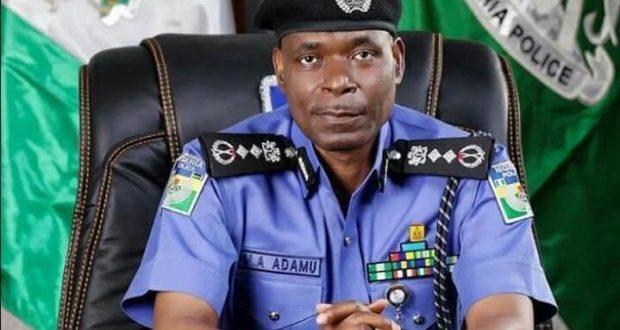 The Inspector General of Police, Mohammed Adamu, has sounded a note of warning on the warring groups in the All Progressives Congress (APC), telling them to keep off the party’s national secretariat in Abuja for now.

Operatives of the Department of State Security (DSS) recently joined armed policemen to block the entrance to  premises of the ruling party.

The building has since been put under lock and key.

Adamu met with the two sides on Friday during which he told them to refrain from taking the law into their hands.

A group opposed to the APC National Chairman, Comrade Adams Oshiomhole, had on Wednesday obtained an interim court order restraining him from parading himself as chairman.

Soon after the order was granted, the police deployed a detachment of their men to secure the APC secretariat.

Human movement within the premises was restricted with only secretariat staff and journalists allowed in.

Party members and visitors were barred.

The following day, a Federal High Court in Kano issued an interim order that the status quo be maintained in the APC.

The development did not sit well with the anti-Oshiomhole group who vowed to resist his planned return to the secretariat yesterday.

Each of the two sides, armed with a court order, went to the Force Headquarters, Abuja yesterday, seeking police protection.

The IG could only ask them to give peace a chance and keep off the party’s national secretariat for now.

It was gathered that Oshiomhole led a faction of the National Working Committee (NWC) to the meeting with the IG while the National Vice Chairman, North East, Comrade Salihu Mustapha, led the other group.

With neither of them willing to yield ground at the meeting, the IG directed that the two groups should stay away from the party secretariat.

Consequently, a team from the DSS was sent to reinforce the police detachment already at the secretariat.

Party staff who reported for work were not allowed into the building.

Some party members and reporters who went to the Secretariat were also turned back from the gate by the security personnel.

No fewer than 15 Police Hilux trucks were seen around the premises.

At 4:24 pm on Friday, five armed security men arrived at the premises on motorbikes to join those on ground.

Oshiomhole had told reporters on Thursday that those plotting his ouster as APC chairman were doing so because of the struggle for the 2023 presidential race.

“I have worked not only along members of the party and with support of the good people of Nigeria for the president to be re-elected, for us to have majority in the two chambers of the National Assembly, I also worked hard to deliver my unit, my ward.

“Those fighting me just feel that if they cannot give me orders, then they must do everything to embarrass my person, but I believe that he who God stands with, no man born of a woman can bring him down. I can’t say more than that.

“Those who are parading themselves, holding meetings at night, my prayer to my God is that let them meet at night, what they do at night will be destroyed in the day time. I don’t go for night business; I do day business. They know themselves, they know me and I know them.

“Unfortunately, very few of our elites want to weaken institutions so that they can control, and if you refuse to oblige them the misuse of your institution, then they go for your jugular. That is the only thing. Otherwise I ask you, remember the confusion we had at the last NEC meeting?

“That meeting took place exactly a week or about 10 days after we had won Kogi election, Bayelsa election before the court took it and donated it to somebody else. Yet in the face of this victory, people said Oshiomhole must be removed, precisely because we won more seats.

“But you see, whatever you do, those who want to fight you will fight you. But I know that my tenure will be defined by God, not by man.

“I worry more about what I will be remembered for when I was chairman rather than how long I was chairman. And I am convinced that I have done my very best.

“Mistakes would have been made, and I want to see the one person who will say he has never made mistakes.”.

Previous: Oshiomhole has ruined APC, he should be expelled- Adamawa State chapter
Next: Edo Guber: Gov Obaseki, aspirant engage in a war of words