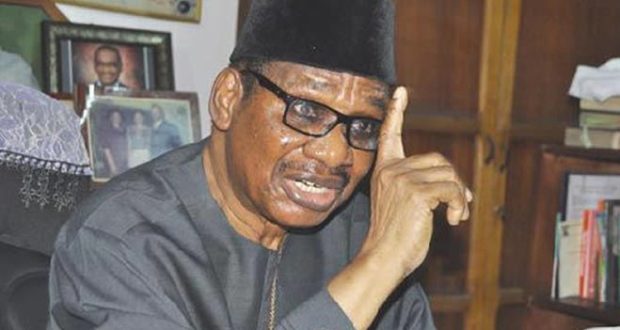 Prof. Itse Sagay (SAN), Chairman of the Presidential Advisory Committee Against Corruption (PACAC), has said that President Muhammadu Buhari should speak out and take a definite decision on the leadership crisis rocking the ruling All Progressives Congress (APC)

According to him, Buhari’s muteness is causing more problems in the party.

Speaking in a chat with Daily Independent, Sagay, a chieftain of the APC said President Buhari as the leader of the party should take a definitive position on whether Comrade Adams Oshiomhole, the embattled National chairman should resign or continue in office.

“Honestly, I think the President should stop being aloof on this very important matter. He should step in, call all the parties together, put his foot down and make clear the situation”.

“If he really wants Oshiomhole to go, he has no option but to resign. If he doesn’t want him to resign, then he should tell all the other people to fall in behind him and let the party be united so as to focus on assisting his government deliver on his promises”.

“I think the President is far too aloof over this matter. He really has to make a dynamic intervention now and make his position clear. Everybody respects him as President and so, if he firmly makes up his mind on the way to go, everybody will fall in line”, Sagay said.