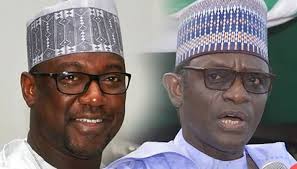 APC Crisis: Stakeholders wait for outcome of Buhari’s meeting with allies in UK

Top leaders, governors and members of the Caretaker Extraordinary Convention Planning Committee (CECPC) of the All Progressives Congress (APC) are eagerly awaiting the outcome of the London consultations between President Muhammadu Buhari and some of his close allies on the leadership crisis rocking the party.

Apart from the Attorney-General of the Federation and Minister of Justice, Mr. Abubakar Malami (SAN), other key functionaries of the government in London, according to reports yesterday, were the Minister of Education Mallam Adamu Adamu, the Minister of Aviation Senator Hadi Sirika and a close ally, Farouk Adamu Aliyu.

The Chairman of the CECPC and governor of Yobe State, Mai Mala Buni, was also in London. He left the United Arab Emirates where he went for medical treatment last week for London on Thursday, The Nation reports.

It was learnt that Buhari may soon break the ice in the APC by issuing a clear-cut directive.

Buni, sources said, is highly optimistic that he would return to office as Chairman of the CECPC upon his return to Nigeria latest Monday.

His confidence was said to be buoyed by the letter of the Independent National Electoral Commission (INEC) to APC CECPC warning against violating the laws and Electoral Act 2022. INEC said in the letter that it recognises Buni as the party’s chairman and that it must be given 21 -day notice for it to recognise a new leadership.

It was not clear last night what Buhari and his key allies have agreed as the way forward for the party. Nonetheless, party chiefs who spoke with THE NATION yesterday in Abuja said they would abide by whatever decision Buhari as the leader of the party comes up with.

A top source said: “As it stands now in APC, President Buhari holds the ace. Both Buni’s camp and the group backing Governor Abubakar Sani Bello, who on Monday announced himself as acting chairman of the CECPC on the directive of the Presdent, are awaiting the outcome of the London meeting.

“Whatever is the directive of the President, all leaders, governors and Caretaker Committee members will comply.

“I can tell you that there is anxiety in both camps because Buhari’s position will determine the way forward for the APC.”

A Buni loyalist said: “He has completed his medicals. He will return this weekend and resume duties as the National Chairman of APC.

“Governors loyal to Buni are busy coordinating a reception for him to prove that he is still the chairman of APC.”