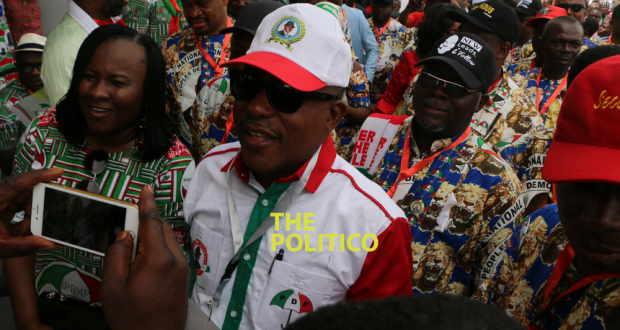 The brief tenancy of APC in Aso Rock Villa will expire on May 28, 2019 – Secondus

The new National Chairman of the Peoples Democratic Party (PDP), Uche Secondus, has referred to the All Progressive Congress(APC) has as a body hurriedly assembled to seize power without a clear-cut plan for governance.

Secondus started his time as the leader of the opposition party by attacking the All Progressives Congress, especially the foundation on which it was built.

Politico.ng reports that  Secondus was declared the winner of the PDP’s chairmanship election at about 3:30 am on Sunday morning.

He was also sworn in shortly after, used his acceptance speech to verbally serve the APC a ‘quit notice’, vowing to lead his party back to power in 2019.

“Let me assure you great members and leaders of our party, that by the grace of God and with all hands on deck, the brief tenancy of the All Progressives Congress (APC) in Aso Rock Villa expires on May 28, 2019. By this, we serve them a quit notice,” he said.

In launching his attack on the APC, the new PDP chairman turned to a quote by Dwight Eisenhower.

“In the words of the 34th President of the United States of America Dwight Eisenhower, ‘If a political party does not have its foundation in the determination to advance a cause that is right and that is moral, then it is not a political party; it is merely a conspiracy to seize power’.

“Judging from this, it is crystal clear to all Nigerians, that APC is not a political party, but a body hurriedly assembled to seize power without a clear-cut plan for governance.”

Previous: Secondus sworn in as new PDP Chairman, says APC is not a political party
Next: PDP’s contributions to the growth of democracy is unequalled – Secondus