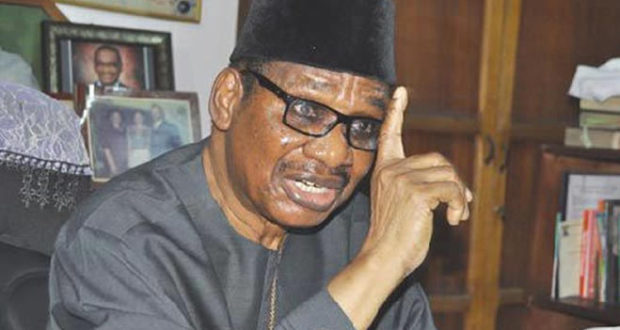 APC made mistake for accepting Dogara back- Itse Sagay

Professor Itse Sagay (SAN), Chairman of the Presidential Advisory Committee Against Corruption, has criticized the All Progressive Congress for accepting former Speaker of the House of Representatives back into its fold.

The legal icon said the return of Dogara to APC was a big setback for the party’s image.

Dogara, who defected to the Peoples Democratic Party(PDP) shortly before the 2019 general elections, was led to meet President Muhmmadu Buhari at the State House

On Friday, Chairman of the APC Caretaker/National Planning Committee, Governor Mai Mala Buni of Yobe, led Dogara to the Presidential Villa for a meeting with Buhari where his defection to the ruling party was sealed.

Reacting to the development, Sagay said the APC as a principled party shouldn’t have allowed Dogara back into its fold.

He said, “For me, this is a big setback for the image of the APC. I think it’s an illustration of the fact that we are yet to adopt ideology and principles in our politics. Because if you have an ideology and philosophy, you won’t be hopping from one party to another.

“So, it creates a negative image of Nigeria and our political parties as immature. Otherwise, nobody drove Dogara away from APC. He woke up one day and decided to follow his friend Bukola Saraki to PDP. Why didn’t he stay there? Why is he back to APC again? So, for him, there is no difference between the two parties.

“This is something the APC should begin to seriously consider whether there is no difference between APC and PDP. If we are the same, why did we unseat the PDP in the first place if we are not bringing in new values to governance?

“If we are not the same, then if a person finds something good enough in PDP to go there, we should let him remain there and not just take him back. This whole idea of allowing people to jump in and out of parties has to stop.

“Otherwise, parties will not develop, there will be no philosophy, ideology and it will be just be parties of chop-I-chop. It shows there is no purpose at all but just a platform for people to satisfy their material needs.”