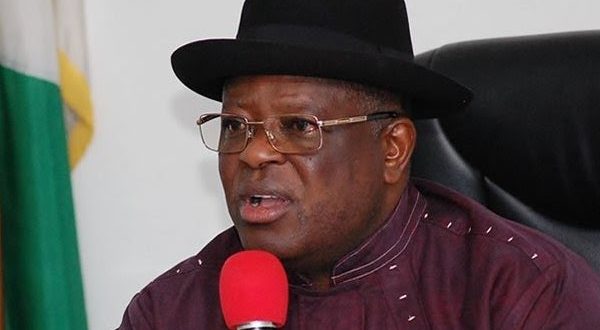 The All Progressives Congress (APC) in Ebonyi said it viewed with great concern, the reported claim by Gov. Dave Umahi of the Peoples Democratic Party (PDP) that he also belonged to APC.

The governor was quoted to have told his audience at the Government House, Abakaliki, on Monday, January 6, that he was “100 per cent APC.”

Addressing newsmen at the end of the APC state Executive Committee’s meeting on Friday in Abakiliki, the Chairman of the party, Chief Eze Nwachukwu, called on relevant authorities to investigate the claim.

He said that such an utterance by a top government office holder was capable of endangering the nation’s party democracy.

“The alleged bipartisan claim credited to our dear governor is capable of jeopardising the nation’s party democracy.

“There is no where it is provided in the Electoral Act for a person to belong to two political parties, especially one occupying an executive position.

“So, we view the comment with great concern because it is capable of truncating the country’s democracy,” Nwachukwu said.

He urged the general public to discountenance the governor’s claim.

The party chairman appraised the performance of the APC-led Federal Government and lauded President Muhammadu Buhari for investing in the development of critical infrastructure in the South-East.

He said that it was not in doubt that Buhari and the APC-led governmeny had improved physical infrastructure in the zone.

He particularly cited the rehabilitation of major federal roads in the zone, especially the Enugu-Onitsha, Enugu-Port Hacourt and Enugu-Abakaliki Expressways.

Nwachukwu also commended the ongoing renovation at the Akanu Ibiam International Airport in Enugu and the construction of the second Niger Bridge.

He therefore called on the zone to rally support for Buhari’s administration in appreciation of its efforts to transform the area.

The chairman said that it was gratifying to know that the federal government had refunded the state the money it spent in the rehabilitation and construction of flyovers on federal roads.

“The major federal roads in South-East were abandoned for the 16 years of the Peoples Democratic Party (PDP) led administration.

“But it took Buhari and APC government less than four years to fix most of the roads.

“Work is at advanced level at the second Niger bridge used as political bait for the South-East by successive PDP governments courtesy of Buhari’s development programme in the zone.

“The FG has assured that work on the bridge will be completed and delivered by 2022 and the government is irrevocably committed to the promise.

“The Akanu Ibiam International Airport closed due to shabby construction work is currently undergoing renovation and will soon be opened for use.

“We use this platform to appeal to our people in the South-East to continue to support the president to steer the country to economic,