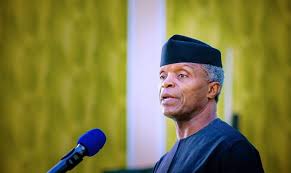 Nigerian Vice President, Yemi Osinbajo says that he is optimistic  that the All Progressives Congress, APC, in South West would soon arrive at a consensus candidate for the forthcoming primary election.

The nation’s number two man who is battling for the APC presidential ticket, spoke during an interactive section with the party’s delegates in Osogbo, the Osun State capital on Friday.

It should be noted that national leader of the party, Bola Tinunu and the Vice President are the major aspirants contending for the sole APC ticket from the region.

Speaking on  the region could curb the looming division being birthed by the presidential ambition of some stakeholders in the South West, Osinbajo said consultations are ongoing to arrive at a consensus candidate.

He said, “I believe strongly in the wisdom of Yoruba elders and leaders, and consultations are always ongoing.

“I believe that very soon we will resolve whatever differences exist and we will reach an agreement on the way forward.”