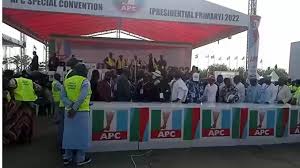 Asiwaju, Bola Tinubu, is coasting to victory as early counting of the presidential primary votes indicates.

The former Lagos State Governor has won 10 of the 10 boxes sorted so far, obtaining over 750 votes.

Coming after him are former Governor of Rivers State, Rotimi Amaechi, and Vice President Yemi Osinbajo.

It was learnt that  Amaechi has secured 143 votes, Osinbajo polled got so far.

The winner is expected to be declared soon.