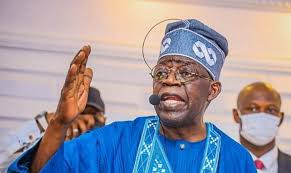 Frontline presidential candidate of the All Progressives Congress (APC), Asiwaju Bola Ahmed Tinubu, is projected to be ahead in the party’s presidential primaries slated for today and tomorrow in Abuja.

A number of factors make Tinubu the candidate to beat.

The factors are: nationwide recognition, reach, structure, support, endorsements, mass appeal, track records as governor of Lagos State, rich experience in both the private and public sectors, The Nation reports.

Tinubu, along with President Buhari, is a co-founder of the APC.

He has mentored politicians across the country, many of who became governors, senators, House of Representatives members, or were elected or appointed through his support.

Tinubu, as APC National Leader, has profound influence on the key structures of the party in many states.

He also has the backing of more governors than his rivals.

With governors having tremendous influence on the delegates – three per local government – Tinubu can feel confident about emerging his party’s torch-bearer and a potential face-off with Peoples Democratic Party (PDP) President candidate Atiku Abubakar in the 2023 presidential election.

The APC northern governors, in a communiqué at the end of their Abuja meeting on Saturday, advised President Muhammadu Buhari to restrict his search within the party for a successor to the southern states.

They said power shift to the South would be in the interest of building a stronger, more united and more progressive country.

Based on the decision, Jigawa State Governor Mohammed Badaru withdrew from the race.

In the South, the Southwest is the bastion of the APC.

Tinubu is the clear favourite in the geo-political zone. He is also being backed strongly by most of the states in the North.

Vice President Yemi Osinbajo may get his votes from Ogun which is his home state and Nasarawa where he is believed to be backed by the state governor.

Former Minister of Transportation Mr. Chibuike Rotmi Amaechi may get his votes from his home state, Rivers, and Plateau where he is being backed by the state governor.

Ekiti State Governor, Dr. Kayode Fayemi may get his votes from Ekiti, Jigawa where the governor is his friend. He may also get some votes from Kebbi because of his closeness to the state governor.

Senate President Ahmad Lawan is being backed by his state, Yobe and states in the Southeast.

Of all the contenders, Tinubu best fits President Muhammadu Buhari’s description of the candidate of his choice.

The President recommended a party man who must be formidable, who appeals to the electorate across the board.

Last-minute’s horse trading intensified last night in Abuja. Chances are that some of the aspirants may step down after a realistic assessment of their chances.

If Yahaha Bello, who has disagreed with fellow APC governor’s from the North, withdraws from the race, he may ask his supporters to vote for the Senate President.

It is also likely that Akpabio and Ayade may withdraw from the race. It was, however not clear who they will endorse and then ask their supporters to vote for.

For Osinbajo and Fayemi, some of their delegates may abandon them at the venue of the primary if they are now fully convinced that they both stand no chance of winning and then vote for Tinubu with the brightest prospect of clinching the ticket. Supporters of other aspirants may be similarly inclined.

A lot will depend on what happened between press time and the time for voting.

Previous: Be careful, cabal in APC wants to destroy you- Fayose warns Tinubu
Next: Northern Governors submit names of Tinubu, Osinbajo, three others to Buhari