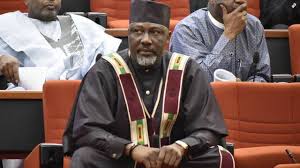 A former Kogi Senator, Dino Melaye has mocked some of the All Progressives Congress, APC, presidential aspirants.

It will be recalled that Tinubu  scored 1,271 to defeat his closest challenger, Rotimi Amaechi, who polled 316 while Vice President, Yemi Osinbajo, came third in the primary, polling 235,

Reacting, Melaye  mocked these aspirants and also changed the name of his Governor, Yahaya Bello to AK47.

“The ruling [party] conducted its national convention and presidential primaries between 6th-8th June, 2022 and the results were announced yesterday.

“Meanwhile Yahaya Bello who is 47 years old scored 47 votes and due to ‘Tatatatatata’ tendency now nicknamed AK47,” he tweeted on Wednesday night.