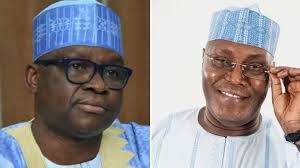 It will be recalled that he was among the fourteen presidential aspirants who battled for the main opposition party’s sole presidential ticket but failed to score a single vote.

It will be recalled that Atiku emerged the Presidential candidate of the PDP for the 2023 general election, having secured a total of 371 votes to defeat his closest challenger, Wike, who garnered 237 votes.

“To this end, I congratulate Alhaji Atiku Abubakar our flag-bearer and wish him and our party success in the general election

“I congratulate former VP Atiku Abubakar over his emergence as the PDP presidential candidate. I also commend Governor Nyesom Wike for remaining consistent in action and character,” Fayose tweeted.

Previous: Okorocha appears before APC screening panel after his release
Next: 2023: Lawyer asks court to disqualify Atiku on citizenship status