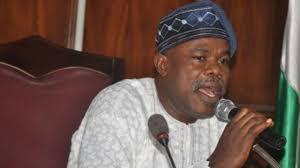 APC Primaries: How they almost killed me- Ondo Speaker

The Speaker, Bamidele Oleyelogun of Ondo House of Assembly has demanded that the  primary election he took part in Ondo be cancelled outrightly.

Bamidele is am aspirant for the All Progressives Congress, APC, in the Idanre/Ifedore federal constituency,

He added that a rerun  due to the primary’s inconclusiveness and the irregularities that marred the exercise last Friday.

He lamented that he was almost killed during the exercise as hundreds of armed thugs threatened to deal with him following his calls for the cancellation of the primary.

Violence had rocked the primary held in Igara-Oke following a fracas between the Speaker’s agent, Festus, and the agent of one of the contenders, Tajudeen Adefisoye, who is the incumbent lawmaker representing the constituency in the National Assembly.

The Speaker, who said he was targeted by a gang, claimed his opponent, Adefisoye, disrupted the primary with armed thugs and security personnel.

Oleyelogun insisted that the returning officer who ruled the primary inconclusive did not announce any results.

“The primary was a sham and should be cancelled outrightly. Every power belongs to God, no one can get anything without God. But you can’t rob me. The molestation was just too much.

“The primary is inconclusive up till now. My opponent at the primary, Tajudeen Adefisoye, brought in lots of armed men both military and paramilitary in about 11 buses, 18-seater buses. In another three vehicles, some men who were in suit with pistols occupied them.

“I have reported to the party. I called the Chairman of the party in the State, but he has refused to pick my calls. I called for about 19 times yesterday and he never returned my calls. I suspect a foul play from the party secretariat and the Chairman because he is from the same local government and town with my opponent, Adefisoye,” the Speaker said.