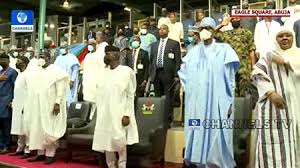 President Muhammadu Buhari has called on delegates of the All Progressives Congress (APC) were charged early this morning to give their votes the presidential candidate with the best chances of securing victory for the party at next year’s elections.

Speaking, Buhari also urged members of the party to remain united and avoid acrimony, charging winners to be magnanimous in victory and those who lose to exhibit a spirit of sportsmanship.

He added that  critical task ahead of the Abdullahi Adamu-led National Working Committee (NWC) “remains to continue to forge the unity of purpose among party members and to keep securing needed compromises in the interest of the party.”

He urged party officials and delegates to follow due process and abide by all extant laws and regulations pertaining to election of the party flag bearer.

Buhari said the flag bearer must be a knowledgeable and fair-minded nationalist with a very strong belief in the unity of the country and strength of character and purpose to steer the country forward.

He said: “My fellow party members and compatriots, I commend you for your various roles and contributions towards the successful conduct of the various APC primaries across the nation. I commend the party stakeholders, officials, organs and the Abdullahi Adamu-led NWC.

“I commend your efforts in organising party exercises and urge you not to rest on our achievements so far. Now we have a big task ahead: the special convention for the presidential primary.

“I congratulate all the winners, our newly emerged party flag bearers, so far, for the 2023 general elections and urge you to be magnanimous in victory, particularly towards your fellow aspirants who conceded to you. I urge you at all times to abide by the Party rules and follow party reconciliation processes.

“In every competitive event, there are bound to be winners and runners-up; and as such, all the aspirants who lost or conceded at the primaries, I equally urge you to maintain the spirit of sportsmanship and to stand by our great party for the next challenges ahead.

”As we go into the presidential primary, I urge all to keep to the same spirit. We must avoid acrimony and maintain the spirit of sportsmanship.

“The critical task ahead of the Abdullahi Adamu-led NWC remains to continue to forge the unity of purpose among party members and to keep securing needed compromises in the interest of our great party.

“I enjoin you all to be fair to all and to create a level playing field for all the presidential aspirants in the coming crucial party exercise.

“Please, follow due process in all the party decisions and I call on all party members, particularly the party officials and delegates to abide by all extant laws, rules, and regulations and to consider voting for the presidential candidate with the best chances of securing victory for our great party in the coming general elections.”