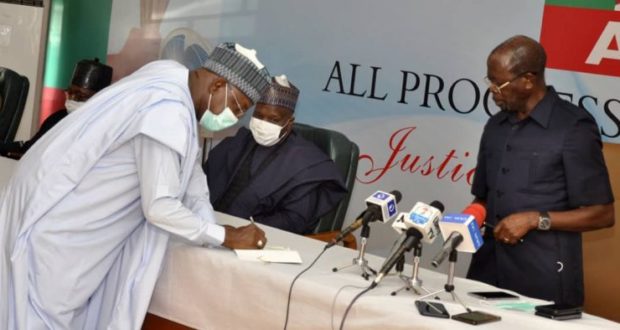 His inauguration, which took place at the party National Secretariat in Abuja, was supervised by National Chairman, Comrade Adams Oshiomhole with Borno Governor Babagana Zulum and his Gombe counterpart Mohammed Inuwa, in attendance.

Also in attendance were other members of the National Working Committee (NWC) of the party, The Nation reports.

Inaugurating the new scribe, Comrade Oshiomhole said: “The party had meeting with President Muhammadu Buhari, Governor of Yobe and also consulted other stakeholders of the party where they came to a conclusion that Arc Waziri Bulama should be admitted as the acting National Secretary of the party pending the ratification by the National Convention.”

Bulama promised to work with every organ and other executives to retain its position as the ruling party.

He assured party faithful of fairness as he said that he has no personal agenda.

Bulama, who lauded the contributions of the founding fathers of the APC and commended the current NWC, promised to do everything possible to bring about the needed unity in the governing party.

Arch. Wazirin Bulama signing the oath of his office as the acting National Secretary of All Progressives Congress’s before the National Chairman, Comrade Adams Oshiomole

Speaking to newsmen, Inuwa expressed confidence in the appointment of the new party’s scribe, whom he will add value to the leadership of the party.

Governor Inuwa, who said he has known Bulama for more than 40 years, stated: “I am very happy that it ended this way. It took sometimes for us to have this replacement but what is more important is that at the end of the day we are able to come to a resolution and the new National Secretary has been sworn in today.

“We hope he will work with other leaders and consolidate on the gains of the party. I know Architect Buluma in the last 40 years.

“I know that he is the person of impeccable character, a person that you can vouch for and is very hard working. He knows what to do.

“In fact, he has already started doing that trying to work and carry everybody around so that APC should deliver on its mandate and that is what he going to do”.

Bulama, who would been inaugurated as the National Secretary since March, had his appointment opposed by a section led the National Vice Chairman from his North-east zone, Mustapha Salihu.

The new acting National Secretary of All Progressives Congress (APC), Arch. Waziri Bulama being sworn in by the National Chairman, Comrade Adams Oshiomhole.