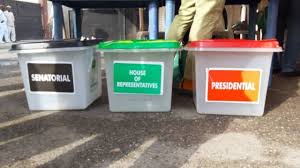 The country’s major opposition, the Peoples Democratic Party has urged the ruling All Progressives Congress to forget its ambition of retaining power in the forthcoming 2023 general elections.

The party made this statement through its  director of New Media, Ehilebo Anthony has called on the ruling All Progressives Congress to bury its ambition of retaining power in the forthcoming 2023 general elections.

Speaking in an interview with newsmen recently Ehilebo berated the ruling APC over the current leadership crisis rocking the party, saying they should be focused on fixing themselves.

“APC shouldn’t even be thinking of 2023. They have to take a pause and organize themselves. They can still meet the PDP and say, ‘you know what, because we have looked at ourselves, and we are not ready for now, take over’”.

He added that, the APC and the opposition party are not comparable, stating that the embattled Chairman of the party’s Extraordinary Convention Planning Committee (CECPC), Mai Mala Buni as an incumbent governor, was never qualified for the position.

“It’s unfair to compare APC to PDP. It is just like two children going to a federal government college. One has been going to class, doing all his assignments while the other does not.

“Who is going to resolve Osun for APC? Is it Buni? Is it Lolo? Is it my friend, Buma Galadima who is the reformed APC chairman? So, which chairman are you going to believe now? Because none of these chairmen are constitutional.

“Buni was never supposed to be a chairman. How can you be a governor and you are a party chairman? What a charade of nonsense!

“And Malami should be careful. There is no AGF that has served Nigeria among the last 3 AGFs that has not either been shamed or removed. You can see what is happening today.

“A serving Attorney General of the federation is the one that is swearing-in party chairmen. It’s not as if these guys did not see how a party is operated”, he added