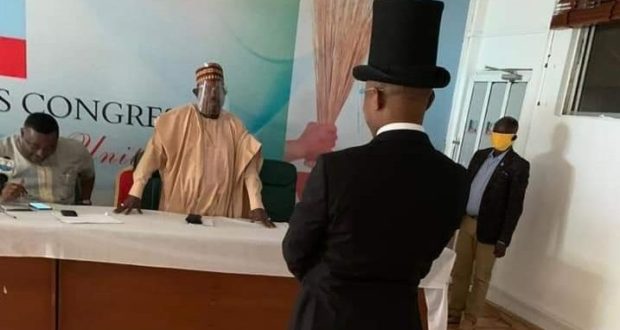 All Progressives Congress (APC)  has sworn in ex-attorney-general of Rivers state, Wogu Boms deputy national secretary of the ruling party.

The swearing-in took place at the ruling party’s national secretariat on Monday in the federal capital territory (FCT).

With the new development, Boms will take Victor Giadom’s place at the national working committee (NWC) of the ruling party.

Giadom has since declared himself as acting chairman of the APC.

On Saturday, Hilliard Eta, vice-chairman of the APC (south-south), said Boms had been recommended by the party in Rivers to replace Giadom who had resigned to be running mate to Tonye Cole, Rivers governorship aspirant in the 2019 election.

“You are aware that on Friday, a competent court of jurisdiction declared Chief Victor Giadom as not being a member of the National Working Committee NWC and should never parade himself as such,” he had said.

“His name has been transmitted to my good office and I want to announce that in the earliest time possible, the south-south zonal executive committee will meet and ratify that name and send same to the NWC of our great party.”

However, Salihu Mustapha, APC north-east vice-chairman, said Giadom did not resign his position to contest the election.

Mustapha said instead of resigning, Adams Oshiomhole, suspended APC national chairman, gave him a waiver in September 2018 that enabled him to seek the deputy governorship position of Rivers and discharge his duties as deputy national secretary.

“Just like Giadom, chief Moghalu came back as national auditor when he lost the primary election of the party in Anambra state,” he said in a statement on Sunday.

Previous: Edo 2020: Trouble looms for Obaseki as other aspirants refuse to step down for him
Next: JUST IN: Buhari in crucial meeting with APC Governors over party’s crisis