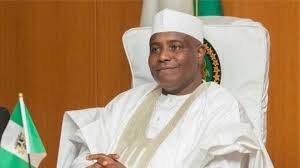 A group supporting the presidential ambition of Governor Tambuwal of Sokoto called Youths for Democratic Change (YDC) on Friday betated the All Progressives Congress (APC) for “zoning” the 2023 presidency to the south.

It will be recalled that speculations are rife that the presidential ticket of the ruling party has been zoned to the South. Thee ruling party is yet to officially say this

He added that that all geopolitical zones are qualified to lead Nigeria.

As stated earlier, the group is rooting for Sokoto Governor, Aminu Tambuwal, to become the flagbearer of the Peoples Democratic Party (PDP).

Okoye noted that the south produces the next President was “insulting” and should not be forced on the people.

He warned the APC against causing division among ethnic groups, demanding a level playing field for all contestants.

“The ruling party zoning its ticket to the south is the height of hypocrisy. Are they saying there are no competent Nigerians from other zones?

“We call on well-meaning Nigerians and our leaders to decide who they will give their votes to as a matter of urgency.

“Of course, there are many of them (aspirants), but we have identified with Gov Tambuwal”, Okoye announced