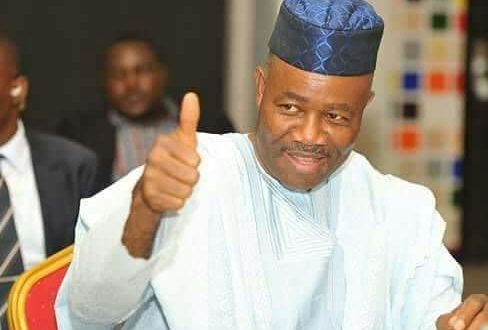 Appeal Court Judgement: Akpabio should resign as Minister, he will face another defeat- PDP’s Ekpenyong

Following the ruling by the Appeal Court in Calabar Cross River State, ordering a rerun of the National Assembly elections in Essien Udim Local Government Area of Akwa Ibom State, the Peoples’ Democratic Party as well as the Senator representing Akwa Ibom North-West Senatorial District, Senator Chris Ekpenyong says he is very optimistic of coming out victorious in the rerun.

Ekpenyong and the PDP who said they were never daunted with the ruling of the Appeal court challenged Godswill Akpabio to, first of all, resign his position as the Minister of Niger Delta Affairs and face a rerun, adding that they would defeat him in the polls as they ‘did before.’

The Appeal Court in Calabar on Saturday cancelled the National Assembly elections in Essien Udim local government area, one out of the ten local government areas that constitute the Akwa Ibom North-West Federal constituency due to reported cases of irregularities and violence, DailyPost reports.

The court added that election results in the other nine local governments remained valid, leaving Akpabio to scout for 38,056 votes in that local government to upturn the victory of his opponent, Senator Ekpenyong.

The Independent National Electoral Commission had said that only 19,455 voters were accredited in Essien Udim local government area.

Meanwhile, the PDP State Publicity Secretary, Ini Ememobong in a statement on Saturday described the Appeal court judgement as an opportunity to widen the margin of victory for the PDP.

According to him, “We welcome the judgement of the Court and hereby indicate our preparedness for elections, as this will provide an opportunity for us to widen the margin of victory against Rt. Hon. Emman Akpan, Senator Akpabio and the APC. We are expectant that the Senator will very soon tender his resignation from his ministerial office to meet us in the campaign field, as the law demands.

“Our party urges the general public to ignore the false stories being peddled by members of the opposition APC about the judgement- which specifically ordered a rerun in Essien Udim local government area alone. It is on record that the margin of victory currently outstanding is in tens of thousands of votes, which has not been affected by the judgement of the court.”

Also, Senator Ekpenyong who seemed unperturbed said his mandate remained intact despite the ruling by the Appeal Court and expressed shock at the inconsistency in the judgement, with the court granting a prayer that was not sought by an appellant.

His words, “I just finished interacting with the senate president and we have an assignment on Tuesday, I remain the representative of my people in the senate and nothing has changed.

“Look all through his petition, Akpabio never sought for cancellation of election in the reliefs he sought, he was urging to be declared the winner in lieu of a purported 61000 votes he claimed for himself. I feel it is not right for a relief he didn’t seek to be awarded to him. But since it is the final arbiter in national assembly matters, there is no way we can appeal the ruling.

“I am very prepared to defeat him again in Essien Udim, let’s go to the field, he has to resign first as a Minister(of Niger Delta) in line with the provisions of the constitution.”

He said with the election in one local government area only, all focus and attention would be given to it and there would be no room for manipulation and rigging, as was noted in the area based on reports of observers and the electoral umpire.

“He brought war and federal might, but the people’s might and God’s mighty hand me victory. This is another opportunity for the gap of that victory to be expanded,” Senator Ekpenyong added.

Similarly, the Appeal Court has also ordered that a fresh election be conducted in Essien Udim local government area for the House of Representatives Seat between the incumbent Nsikak Ekong of the PDP and Emmanuel Akpan of the APC.

However, Chief Godswill Akpabio, on his Twitter handle has begun to celebrate his victory at the Appeal court, describing it as a ‘victory for democracy.’