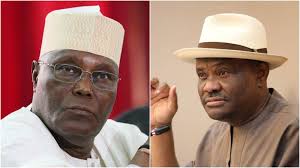 Atiku has not shown genuine interests in reconciliation- Wike’s camp

The loyalists of Governor Nyesom Wike of Rivers State has  warned that the alleged move by the former vice-president to create a separate PDP structure ahead of the election showed that he was not keen on uniting members of the party.

They were reacting to a television interview in which a pro-Atiku politician and former two-time National Assembly member, Senator Lee Meeba, described Wike as a dictator.

Meeba alleged that the governor vowed to stop them from campaigning for Atiku in the state without his permission.

The former lawmaker added that Wike was furious that he and some PDP leaders in the state met with Atiku in Abuja to promise him that Rivers would vote for a PDP candidate in 2023.

But the governor’s loyalists said the alleged move by Atiku to use ”spent forces and Abuja-based politicians” to fight Wike showed he was not interested in genuine reconciliation.

The loyalists who spoke with The Nation, are the Chairman of Emohua Local Government Area, Chidi Lloyd and a former Commissioner for Information, Ogbonna Nwuke.

Lloyd said: “It is obvious that Atiku wasn’t destined to be president with his body language. As a Catholic, I will tell you that clearly. I haven’t seen a man, who is given delicious food and he pushes it down.

“Nobody abdicates his pulpit to intruders. Atiku came back to the PDP from the APC(All Progressives Congress), contested the 2019 election, lost, and proceeded to Dubai, United Arab Emirates. He was on that long vacation until the election period. He came back.

” Rather than look for ways and means to pull everybody together on a table, the likes of Lee are running to him in Abuja. Is that where the election will hold?

Lloyd insisted that the alleged plot by Atiku and those loyal to him to create a crisis in Rivers PDP was an exercise in futility because the party’s leaders were solidly behind Wike.”

His words: “It is not possible to divide the Rivers PDP. It is not realisable because it is historic. Right from the days of the NPN(National Party of Nigeria), it is difficult for those who are Abuja-based as it is now, to take control of the power apparatus.

”The coalition of Abuja politicians has never really won at home. The home front is always united and able to overrun them and that is what will happen in 2023.

”I pray that the gods will not decide to destroy Atiku because of the way he is acting. He is acting like he has won an election.

“But all he has is just a ticket. Winning an election is different from having a ticket. I hope he realises that having collected the ticket of the party, it is his responsibility to bring everybody together. If he is not sincere about what he is trying to do, it won’t work.

“Atiku is not showing by his actions that he is interested in reconciliation. The consequences of his actions will be upon his head.”

Previous: Peter Obi meets US envoy over 2023 poll
Next: Tinubu has paid his dues, he is qualified to rule Nigeria-Nnamani