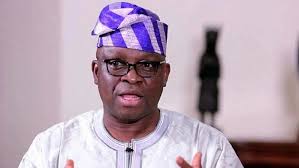 Ex-Governor of Ekiti, Ayo Fayose,  has lashed out at some presidential aspirants in the umbrella of the Peoples Democratic Party, PDP, and vowed never to step down for anyone.

Speaking in a state, he took a swipe at the former Vice President, Alhaji Atiku Abubakar and former Senate President, Dr. Bukola Saraki, for seeking the PDP sole ticket for the 2023 election.

He held them responsible for failure of PDP, saying that had it beem the duo stayed in the PDP in 2015 and supported former President, Goodluck Jonathan ,APC would not have won the presidential election.

Speaking on Channels Television’s Politics Today, on Wednesday, the former governor, said, “Let me take for example our respectable leader, His Excellency Alhaji Atiku Abubakar, he won in Adamawa with less than 20,000 votes [in 2019].”

“Go to Sokoto, what’s the voting difference? Let us go to Bukola Saraki in Kwara, we actually lost there. Let us sit back and look at figures.

“This amalgamation of people trying to…at the end of the day it backfired. Jonathan, despite his flaws, we had supported him and some of our leaders didn’t go to APC …if some of them had become Presidents in Abuja would they come back? Will Atiku come back? Would Bukola Saraki have come back?

“When the journey was rough and bad, they ran back. Today, because our party is a party that tries bringing people together, we must not forget history.

“Today, I’m glad they are challenging people jumping from one party to the other, those are the ideologies that are missing,” he added.