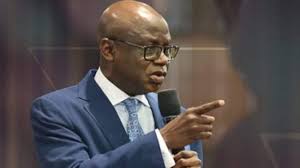 Bakare to Buhari: History will recall that you failed if you don’t restructure Nigeria

The founder of the Citadel Global Church, Pastor Tunde Bakare, has urged President Muhammadu Buhari to “tear down” the 1999 Constitution.

Speaking on the state of nation on Sunday at the church headquarters in Lagos, Bakare described the constitution as a glorified death certificate.

Bakare traced the nation’s socioeconomic and political challenges to a faulty political foundation, following the destruction of its original political structure by the military.

He reasoned that ethnic, religious and secessionist agitations in the East, West and North were indications that Nigeria was in dire need of restructuring.

He added that  the next President comes from is not of utmost importance.

Bakare said: “I am fully persuaded that the 1999 constitution is nothing more than a glorified death certificate.”

Addressing President Buhari, he said: “Mr President, stop passing the buck to the National Assembly…Tear down this inhibitive concoction of a constitution. Tear it down so that we can build a nation.”

He added that those insisting on the 2023 elections before restructuring, “are putting the cart before horse.”

He warned the President that unless he restructured the country before leaving office, “history will recall that you failed…”

He also announced the launching of a group known as Nigeria for Nigerians, N4N.

Previous: APC, PDP have misruled Nigeria, Jega laments
Next: God owns my life, it can be taken only by Him- Tinubu