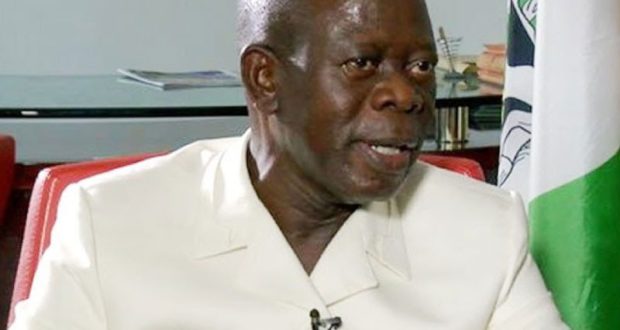 The All Progressives Congress (APC) National Chairman, Adams Oshiomhole, has assured Bayelsans that the party would correct all the wrongs committed by the Peoples Democratic Party (PDP) in the state if it wins the governorship election in the state.

Oshiomhole said this at the flag-off of the party’s campaign in Ogbia town, Ogbia Local Government area of the state.

He said that the party had presented a good team and was poised to win the Nov. 16 governorship election in the state.

“APC is coming to right the wrongs of the PDP government in Bayelsa state, come Nov. 16.

“The APC government, under David Lyon, will work assiduously to provide security, employment and empowerment for all Bayelsa people,” he said.

Oshiomole said that APC’s victory at the poll would restore hope to the people of the state and rebuild their confidence in governance.

“I understand that my dear friend, the outgoing governor of Bayelsa, is already visited by the withdrawal syndrome facing any governor close to the end of his tenure.

“Our desire is to see that the people of Bayelsa will witness greater development and sustainable growth,” he said.

He assured the Bayelsa people of APC’s readiness to enthrone positive change in the state.

“APC is coming to make a difference in Bayelsa; Lyon will not betray those who stand by him; he will carry the youth along; he understands the language of poverty.

“Lyon understands the deprivation which this state and people of the South-South went through, and that is why he decided to fight for justice,” he said.

In his speech, the APC governorship candidate, promised to evolve policies that would bring remarkable development to the state.

He particularly promised to revive the Kolo Creek gas turbine to ensure adequate power supply in the state.

“I am a man of my words; I will not fail my people; Bayelsa’s money will be used for the good of all; I am coming to serve my people and not for them to serve me.

“There is insecurity in Bayelsa at the moment; we will handle it adequately; I will work for the development of our state.

“We shall ensure adequate power supply in Bayelsa; our gas turbine will be revived under my government,” he said.