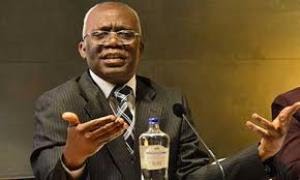 Femi Falana, human rights lawyer, says it is illegal for pre-election matters to be determined by the courts after the poll has been conducted.

The lawyer said this while reacting to the supreme court’s sack of David Lyon, candidate of the All Progressives Congress (APC) in the November governorship election in Bayelsa, as governor-elect.

On February 14, the apex court sacked Lyon on grounds that Biobarakuma Degi-Eremieoyo, his running mate, falsified his credentials, The Cable reports.

In a piece entitled: “Why the law requires pre-election cases to be decided before elections”, Falana said section 31 of the electoral act states issues surrounding a candidate’s nomination must be determined before election is held.

To further buttress his point, the lawyer said section 285 of the constitution does not give room for a pre-election matter to be determined after the poll.

“A candidate cannot be disqualified from participating in an election that has been held and concluded,” he said.

“As far as section 285 of the constitution is concerned a pre-election matter can no longer be turned into a post election matter and determined after the election.

“It is indubitably clear that the decision of the supreme court in respect of Bayelsa state governorship election was anchored on the assumption that a pre-election could be heard and determined after the conclusion of an election.

“Although, I fully agree with those who have argued that the supreme court is determined to halt the impunity of godfathers who impose candidates on political parties, the rights of voters which might have accrued ought to be considered.

“In sanctioning political parties that breach the provisions of the electoral act or the constitution, the verdict of the courts must not be substituted for the franchise of the electorate.”