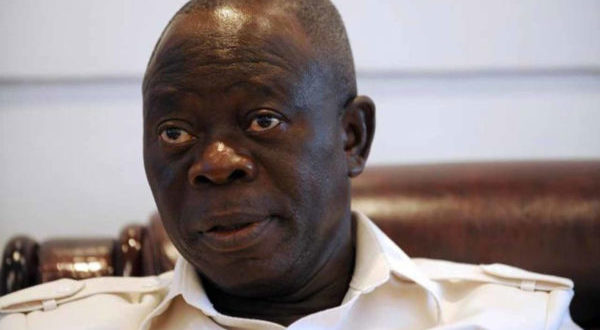 A renowned legal practitioner, Mr Tope Akinyode, has called on the administration of President Muhammadu Buhari to quickly arrest and charge National Chairman of the All Progressives Congress, Adams Oshiomhole, for treasonable felony over his utterances after Thursday’s Supreme Court ruling nullifying the election of David Lyon as new governor of Bayelsa State.

Oshiomhole, a former governor of Edo State, had after the apex court’s verdict said that nobody would be sworn in as governor of Bayelsa as a result of the development, which he stated was unacceptable to them.

According to Akinyode, who is the National President of Revolutionary Lawyer’s Forum, such utterances could cause chaos and further heat up the already tensed polity, SaharaReporters reports.

He said, “Our attention has been drawn to the unpatriotic and extremely pathetic statement of the APC declaring that from Friday, there will be no government in Bayelsa.

“Oshiomhole overran himself to utter the mischievous statement while reacting to the Supreme Court judgment which declared the candidate of the Peoples Democratic Party, Diri Douye, winner of the election against David Lyon of the All Progressives Congress.

“Although, we are a bit taken aback by Oshiomhole’s obvious lopsided reasoning, which embraces the Supreme Court over Hope Uzodinma’s declaration as winner of the Imo governorship election despite public outrage and now disparages the judgment of the same court in the Bayelsa election.

“Notwithstanding the foregoing, we hereby demand that the Federal Government urgently arrest, charge and prosecute Oshiomhole in court for treasonable felony and conspiracy with the APC to overthrow the government.

“This is particularly desirable because it is on similar but frivolous grounds that Omoyele Sowore, convener of #RevolutionNow, was arrested and is now being prosecuted before the Federal High Court in Abuja.

“For moral justification, display of impartiality and commitment to equity, it is important that the Federal Government prosecute Oshiomhole as it is doing to Sowore, so that the courtesies of the SSS and the pleasure of its facility will also be enjoyed by Oshiomhole.”