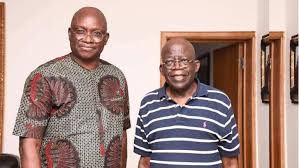 Be careful, cabal in APC wants to destroy you- Fayose warns Tinubu

A chieftain of the People Democratic Party and the former  Ekiti State Governor, Ayodele Fayose, has warned that the National Leader of the All Progressives Congress (APC), Asiwaju Bola Tinubu, to be careful on his move to secure the presidential ticket of the ruling party.

He warned that Tinubu might get ‘the MKO Abiola’ treatment during the presidential primary of the party by the powerful cabal within the presidency.

He issued this warning n in an open letter to Tinubu on Monday, which he personally signed.

He said that Tinubu was swimming against the tide and should proceed with extreme caution.

The letter read in part, “Going by the handwritings that are now clearly on the wall, if I may consider sir, I see you as one that may be swimming against the political tide of the cabal in your party.

“They are equally preparing for your actions and reactions and are fully set to contain same as they did to both Awolowo and Abiola.

“Unfortunately, your kingdom has been badly balkanised if what happened in Abeokuta is anything to go by.”

Fayose added, “for reasons of not being misrepresented, I will like to stop here and allow you to take your decisions, good or bad as a wise full-grown adult whom you are.

“The book of Proverbs 22 verse 3 reads, ‘Sensible people will see trouble coming and avoid it but unthinking people will walk into it’.”