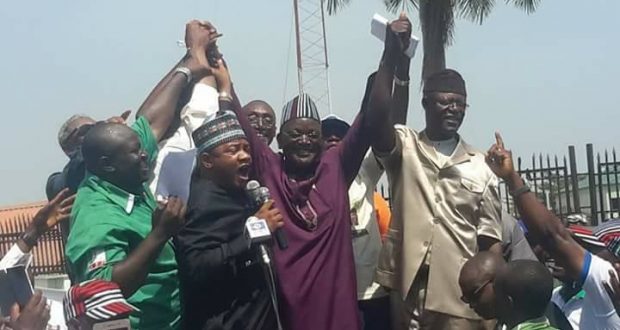 Benue Governor, Samuel Ortom has declared his intention to continue for a second term as the state number one citizen come 2019.

Ortom made the declaration on Thursday.

Supporters of his candidacy from his immediate constituency, including those from Guma, Makurdi, Gwer West, Gwer East and the nine local government areas of Benue South district, had already pledged their loyalty to him.

The Governor said, “earlier when I was being pressured by so many groups to run again, I told the people that I can only declare to run after I had prayed and heard from God and if He gave me the nod to contest I would tell the people.

“I want to tell Benue people today that I have prayed and God has answered and directed that I should go and run again. So I am happy to inform the people of our state that we are moving ahead to 2019 and we will succeed.
I will therefore also not shun the call of the people asking me to run again.

“I have taken the challenge, bearing in mind that while I was praying, God said he is the beginning and the end and by His Grace, we will make it in 2019.”

“I vividly recall that my emergence as Governor of Benue state today was Divine because it was beyond human imagination. So if the one who did it that time has asked that I should continue, all I need to do is to follow.”

“I urged my supporters to be law abiding, don’t kill anyone for my sake because my coming in 2015 was the making of God. It is He alone that brought me here, he has spoken again and I have heard Him.”

The Governor, who promised to work hard to reduce the state’s wage bill and ensure prompt payment of salaries, assured that at the end of his eight year tenure the people would be happier for it.

Responding on behalf of the various groups from the 13 local government areas, All progressives Congress, APC, stalwart, Akange Audu and the National Ex-Officio of the party, Nelson Alapa said the Governor’s humane disposition and achievements despite daunting challenges, were enough to compel him to run again.

Previous: We have no furniture, no light for eight months over unpaid bills – Uyo INEC staff
Next: APC dismisses allegation of planning to use Military to rig Anambra election