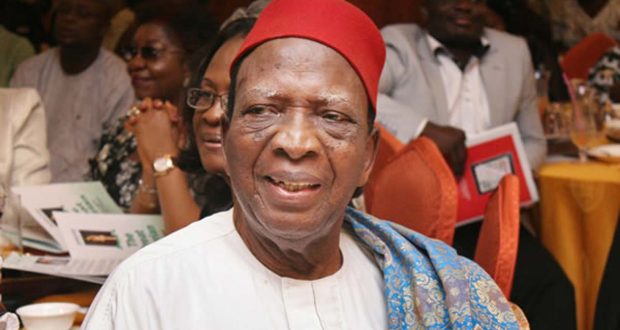 CONSTITUTIONAL Lawyer and Leader of Igbo Leaders of Thought (ILT), Professor Ben Nwabueze, has called for another meeting between Southeast governors and the Leader of the outlawed Indigenous People of Biafra (IPOB) with a view to stemming further restiveness in Igbo land.

In a statement issued by Professor Nwabueze which was made available to Nigerian Tribune in Enugu on Monday, he recalled that on August 30, 2017, Mazi Nnamdi Kanu, Evangelist Elliot Ugochukwu-Uko and him met with the South-East Governors Forum.

“The meeting was chaired by the current Chairman of the Forum and Governor of Ebonyi State, H. E. Engr Dave Umahi, who in his conduct of the meeting, exhibited his characteristic sagacity, candour and forthrightness tempered with friendliness.

“Perhaps charmed by the things said by the Chairman and the way he conducted the meeting, Mazi Nnamdi Kanu, on his part, showed an accommodating disposition for an amicable resolution of the crisis, and more specifically a disposition to reconsider the threat to stop or disrupt the 2019 elections and the Anambra State governorship election on 18 November, 2017, but emphasized that the decision does not lie with him alone and that the leadership of the Indigenous People of Biafra (IPOB) must be carried along. Accordingly, it was agreed to meet with the leadership of IPOB in order to try to secure their agreement and support.

“Regrettably, while the follow-up meeting was being arranged, the attack on Mazi Nnamdi Kanu’s home in Umuahia by soldiers of the Nigerian Army on 10 September, 2017 occurred, as reported in the news media, which expectedly, triggered clashes between the IPOB supporters and the Army in Aba, Umuahia and other places, resulting in the death of, or injury to, several people. Reacting to this sad development, the IPOB leadership indicated its intention not to attend the planned meeting.

“Despite all this, Mazi Nnamdi Kanu made it known that, in the spirit of a search for amicable resolution of the crisis, he personally would still attend the planned meeting, now fixed for Friday 15 September, 2017.

“However, a day or so before that date another attack on his Umuahia residence by soldiers, armed with guns and armoured vehicles, involving serious causalities, was reported in the media, which caused Nnamdi Kanu to renounce his intention to attend the planned meeting, even despite all the provocation that led to its repudiation by the IPOB leadership. It seems unreasonable and unfeeling to expect him to attend the meeting when the causalities included two of his cousins.

“I had arrived Enugu from Lagos for the meeting on Thursday 15 September. But without the IPOB leadership, especially without Nnamdi Kanu, it seems to me that the essential purpose of the meeting had been defeated. So, I went back to Lagos. The meeting should be reconvened when the tension caused by these developments had quietened down, he concluded.