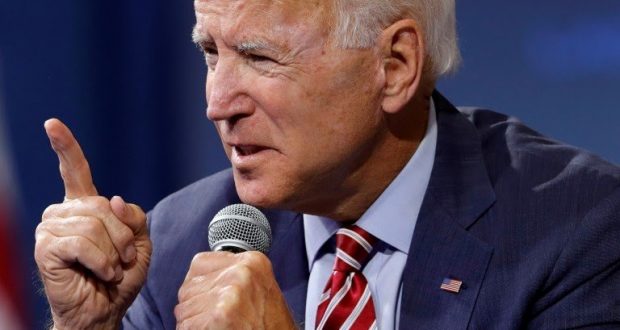 Biden to Trump: We will escort you out of White House if you refuse to go

Joe Biden’s United States presidential campaign has warned that President Donald Trump could be escorted from the White House if he refuses to admit defeat in the knife-edge US election.

Democratic challenger Biden is edging towards the presidency after pulling ahead in the key states of Pennsylvania and Georgia.

According to Aljazeera, Trump has made it clear that he is not ready to concede, launching unsubstantiated claims of voter fraud and claiming falsely that he had been cheated out of re-election.

“As we said on July 19th, the American people will decide this election. And the United States government is perfectly capable of escorting trespassers out of the White House,” Biden campaign spokesman Andrew Bates said on Friday.

In an interview with Fox News in July, Trump refused to commit to accepting the results of the election and a peaceful transfer of power if he lost.

US President Donald Trump has made it clear that he is not willing to concede the knife-edge US election [Mandel Ngan/AFP] With tens of thousands of votes remaining to be counted, many of them from heavily Democratic areas, Biden opened up a 9,000-vote lead over the Republican incumbent in Pennsylvania, real-time state election results showed.

Pennsylvania and its 20 electoral votes would be enough to put the 77-year-old Biden past the magic number of 270 votes in the Electoral College, which determines the presidency.

Biden has also taken a razor-thin lead in Georgia, a state once seen as reliably Republican, which announced on Friday that it will recount the votes.

The former vice president will deliver an address to the nation on Friday evening, a campaign official said.

Biden last spoke on Thursday afternoon when he told reporters in his home town of Wilmington, Delaware that he had “no doubt” he would be declared the winner of the election.

With his victory looking increasingly likely, the US Secret Service increased its protective bubble around the former vice president, The Washington Post reported on Friday

Previous: US 2020: Biden expresses optimism, says he has started preparing for work
Next: 2006 impeachment: Ladoja fires back at Obasanjo, calls him a liar