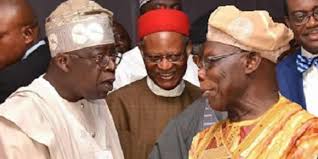 Why Obasanjo will continue to be bold and courageous- Tinubu

The National Leader of the ruling party said that Obasanjo is bold and courageous, adding that he will continue to be so, for that is the essence of his character.

In his birthday greetings sent  by his Media Aide, Mr Tunde Rahman, on Saturday in Lagos, Tinubu praised Obasanjo for his patriotism and commitment to the unity of the country.

Tinubu said that “the former president had remained strong, agile and committed to the greatness of our dear nation.”

According to him,  although there had been instances where he had disagreed with Obasanjo on important substantive issues, the former president had made numerous useful contributions to the country.

“Our debates have been spirited, yet always professional and without personal animus.

“Through it all, I have come to respect his love for the country and legendary work ethics.

“President Obasanjo has worked tirelessly for Nigeria, Africa and indeed the black race and has earned his stripes as an important statesman on the world stage.

“Baba Obasanjo is bold and courageous and will continue to be so, for that is the essence of his character,” he said.

Previous: 2023: Some presidential candidates should be in jail by now- Obasanjo
Next: I am not working against President Buhari, says Al-Makura